Those Who Do Not Drown
Forum Expanded Exhibition

© Naeem Mohaiemen
May not be used for Social Media
In an empty hospital in Kolkata, India, a man faces protocols of blood, a subtly discriminatory office, and a vacant operating theater. His mind is on a loop of the last months of his wife’s life, when a quiet argument developed. When is the end of pharma-medical care, whose life is it anyway?
They were an estranged couple, thrown back into intimacy by an unknown illness. Even in a dreamworld of his making, the paranoia of infection is twinned with a hesitant intimacy. The film revisits themes from Mohaiemen's earlier Tripoli Cancelled (2017): family unit as locus for pain-beauty dyads, abandoned buildings as staging ground for lost souls, and the necessity of small prevarications to keep on living. In Tripoli, the boredom of daily life is punctuated by letters to an invisible wife, and endless readings of Richard Adams’s dark children’s book “Watership Down”. In Jole Dobe Na, a memory of final days is kept alive by the partner, and the book readings are from Syed Mujtaba Ali’s stories of Europe between the two wars.
by Naeem Mohaiemen
with Sagnik Mukherjee, Kheya Chattopadhyay, Trina Nileena Banerjee India / Japan / Sweden Bengali 64’ Colour, 1-Kanal-Videoinstallation 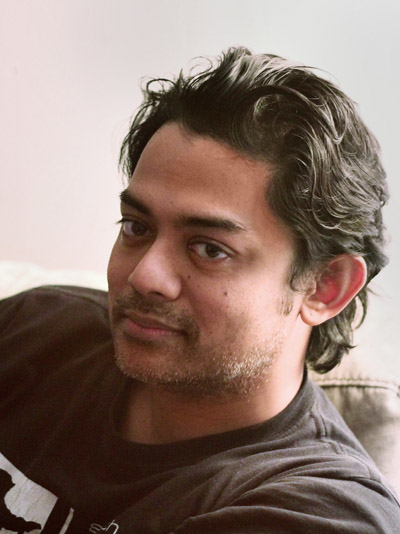 Naeem Mohaiemen combines essays, films, photography, and installations to research the idea of socialism, incomplete decolonization, shifting borders, and unreliable memory. Despite underscoring a historic left tendency toward misrecognition of allies, a hope for a future transnational left as the only possible alternative to current cages of race and religion is a basis for the work. He was a 2014 Guggenheim Fellow, 2018 Turner Prize finalist, and was shortlisted for the 2019 Herb Alpert Award. His films have been programmed at film festivals internationally. He is the author of “Midnight’s Third Child” (Nokta, forthcoming) and “Prisoners of Shothik Itihash” (Kunsthalle Basel, 2014), as well as co-editor of several other volumes. His work has been shown in solo exhibitions and biennales around the world and is housed in the permanent collections of Kiran Nadar Museum, Delhi, Museum of Modern Art, New York and Tate Modern, London, among others. He has a PhD in Anthropology from Columbia University.