Cinema Born of the Icy Cold

In 2017 NATIVe – A Journey into Indigenous Cinema is turning its gaze upon one of the most gravely threatened regions in the world: the Arctic. Climate change and the greed of industrialised nations are placing the people who live there under huge pressure. In this interview, curator Maryanne Redpath and project manager Anna Kalbhenn speak about the false image of the noble savage, Indigenous spirituality and storytelling in 42 cycles. 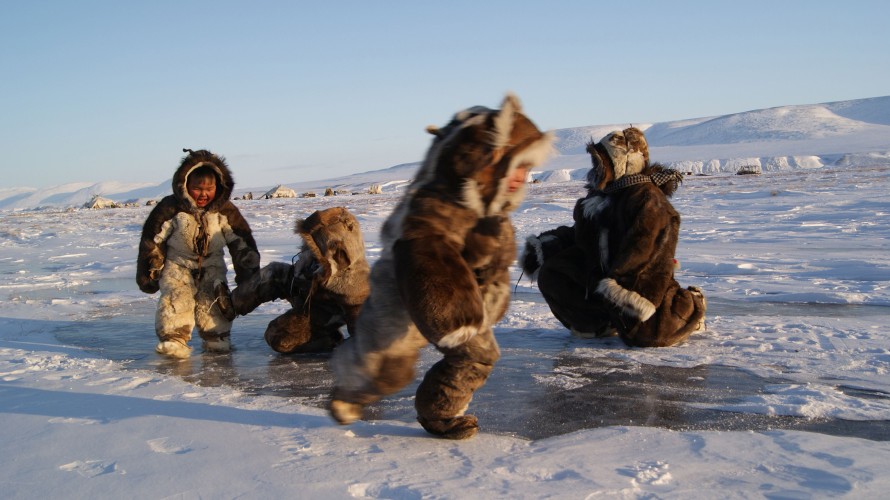 A special connection with nature appears to be a motif in almost all the films in the NATIVe programme. Kniga Tundry. Povest' o Vukvukaye – Malen'kom Kamne. (The Tundra Book. A Tale of Vukvukai - the Little Rock.) immediately caught my eye.

Maryanne Redpath: nature is always an important element in Indigenous cinema and especially in films from the Arctic because the people there must cope with such extreme cold. They are hunters, herders, nomads and have a strong connection to the land. The Tundra Book is a documentary which shows the Indigenous culture, a life with a sense of community, which has been pursued for generations on the Chukchi Peninsula in northern Russia. The film follows daily life as the seasons change from polar day to night. The family herd reindeer. It is a contemporary film in which the present is not idealised but is nevertheless depicted in deeply impressive images.

Anna Kalbhenn: You see an intact community – at least at first glance. In many places in the film, however, it becomes clear that there are also difficulties. For example, the children are collected and sent far away from home to school for ten months of the year. When they return to the tundra they are almost unable to cope with this world anymore because their know-how and, as they grow older, sometimes also their desire is missing. 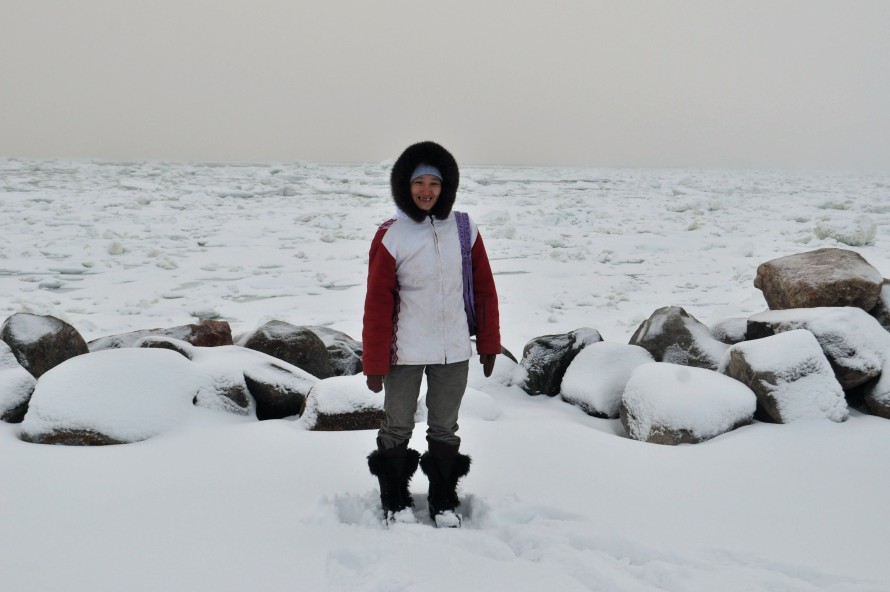 Nowhere Land, in comparison, seems to me to be about the loss of the land...

AK: Nowhere Land is a Canadian short film. The director Rosie Bonnie Ammaaq is also the film’s protagonist. She tells us about her life – from childhood onwards. Climate change means her family can no longer remain on their ancestral lands on Baffin Island in Canada. The inhabitants have been resettled and now pursue an urban existence. Their traditions are being lost. Ammaaq shows the devastating consequences of the resettlement on her and her family.

MR: Nowhere Land is one of nine short films in the programme. They complement the feature films both in subject matter and form. Ammaaq shows the effects of climate change and the greed of industry which are both severely affecting the Arctic. Along with the impact of colonialism, they bear grave consequences for the people who still live in this region.

The films in the programme make it sound like Indigenous cultures live in harmony with nature rather than exploiting it. Is that the case?

MR: More than our consumer society does, if you want to make the comparison. But people often have a highly romanticised image of Indigenous cultures. Of course they live in a different way with nature than we do here in Berlin. But you shouldn't forget that not all Indigenous people live outside of cities. It is worth exploring their many diverse forms of living and seeking to understand the knowledge that has developed over many millennia – something which western people and researchers often find difficult. When someone says on account of their observations and their knowledge that nature is changing, we demand that this statement must be immediately, obsessively supported with facts and figures and measurements. Simply to listen and believe seems impossible. 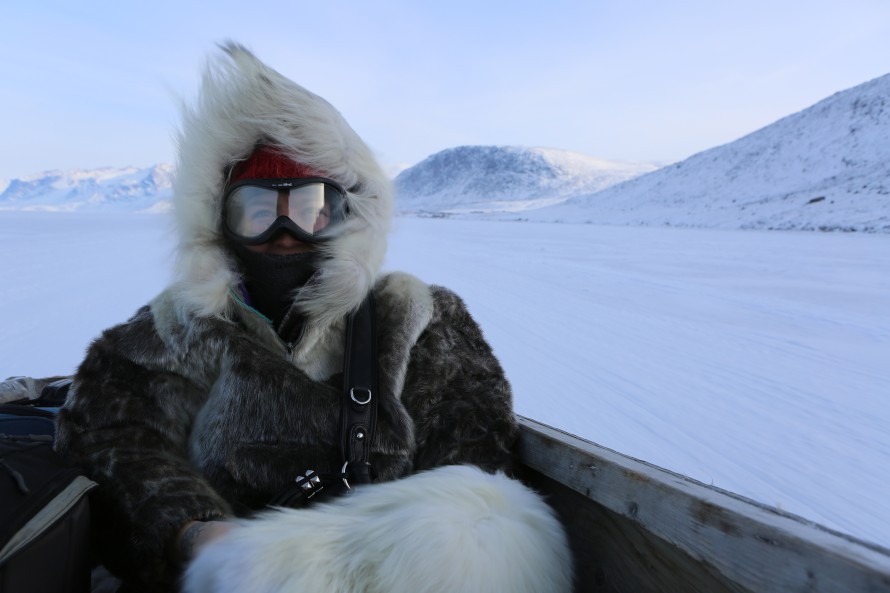 © National Film Board of Canada

AK: The relationship between Indigenous cultures, nature and the rest of the world forms a complex interplay. This ambivalence is visible, for example, in the documentary Angry Inuk by Alethea Arnaquq-Baril. The industrialised nations have unquestionably had an effect on the realities of life for Inuit – but the opposite is also true. The sole source of income for many Inuit is the trade in sealskins, a by-product of their diet. They make clothing and jewellery from the pelts for their own use but also to sell. Environmental organisations, however, protest loudly against seal hunting. Inuit are still allowed to hunt them, but the trade embargo means they may no longer sell the skins and their products. Such interdependencies can only be understood from a global perspective. Not all Inuit in northern Canada want to live like they did thousands of years ago; instead, they want to participate in the global community. NATIVe is all about listening closely to Indigenous voices and taking them seriously. It is about offering them the opportunity to speak for themselves and to present their situation. 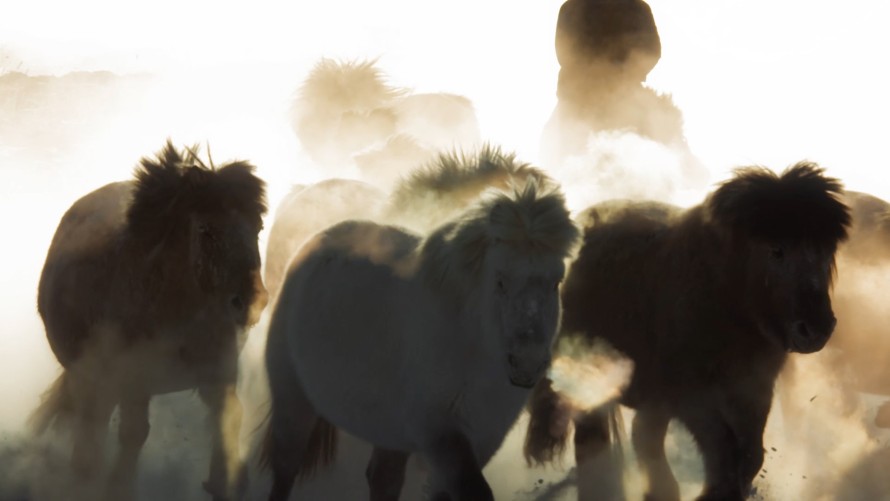 The Image of the Noble Savage

Especially in the Germany of Karl May, it appears that misunderstandings between the different cultures are a given. How great is the danger of false romanticising?

MR: Very great. And romanticising can quickly lead to the quest for a lost paradise and the projection of the idea of the so-called "noble savage". We must really watch out for this. In NATIVe we seek to achieve the opposite. The situation of Indigenous people is nowhere near as ideal as our own sense of longing tries to make us believe.

At the same time, the medium of cinema is virtually predestined to be a place for longing and projection. How do the films handle this?

AK: Cinema has always been a place of longing and it can remain so. Sometimes this is also in evidence in the NATIVe programme. However, the films are by no means romanticised depictions of an idyllic world. We show work made by Indigenous filmmakers – their aesthetics, artistic and narrative ambitions are equally as important to them as to any filmmaker. The focus is on the medium of film and how it can be utilised.

Can indigenous cinema be described as a genre?

MR: "Indigenous Cinema" is a very new term and is not a genre in the proper sense. However, terminologies must always be worked with – it’s a tricky situation. In addition, the cultures are very different. In Greenland, for example, a very idiosyncratic and fresh film landscape is currently developing.

AK: We will be exploring this topic in the "Indigenous Cinema and the Mainstream" event where we will discuss the national differences between Indigenous film cultures with Indigenous producers and film institutes. Many Indigenous filmmakers, producers and directors question their place in the film industry and how they can gain recognition at national and international level. NATIVe is also running a stall at the European Film Market together with various partners. Many associated filmmakers and producers will go there to bring new projects and ideas to the market. This presence and participation at the EFM supports the place of Indigenous films in the international film industry.

Half½ by Aka Hansen

The Absence of Violence

What strikes me about the programme - in view of other types of cinema in which colonialism plays a role – is the almost complete absence of violence. Why is that?

MR: The history of colonialism is a very violent history, even if it does not appear immediately at the heart of all the selected films. Sameblod (Sami Blood) by Amanda Kernell, for instance, is about a Sámi girl who is sent to a Swedish boarding school in the 1930s where she and her fellow pupils are measured for racial studies. This humiliating experience is one of the reasons why she wants to stop being Sámi and she takes a Swedish name. In this way, violence and oppression are manifested.

AK: Identity is a central topic for many Indigenous people. In Half½ the director Aka Hansen, who is half-Danish, half-Greenlander and who lives in Copenhagen, addresses the prejudices which arise as soon as she mentions her heritage. Her questions are fundamental: what does identity mean? How does it feel to be a Greenlander? Do I by necessity have to choose between a traditional and urban way of life? However, there is actually little physical violence in the films – apart from in the short film Sikumi (On the Ice) by Andrew Okpeaha MacLean where a murder leads to a moral conflict: the character who witnesses the crime must decide between telling the truth and following the plea of the murderer to keep it to himself. When we were watching the selection screening of Angry Inuk, the director explained in her introduction the Inuit culture of conflict. It is a culture where conflict does not result in violence but instead has various rituals at its disposal to deal with it. The rivals meet each other with their drums, sing and make fun of their opponent – this lasts until everyone is laughing and unity is restored. A very different kind of culture of conflict; devoid of brutality. A quiet protest from our point of view. 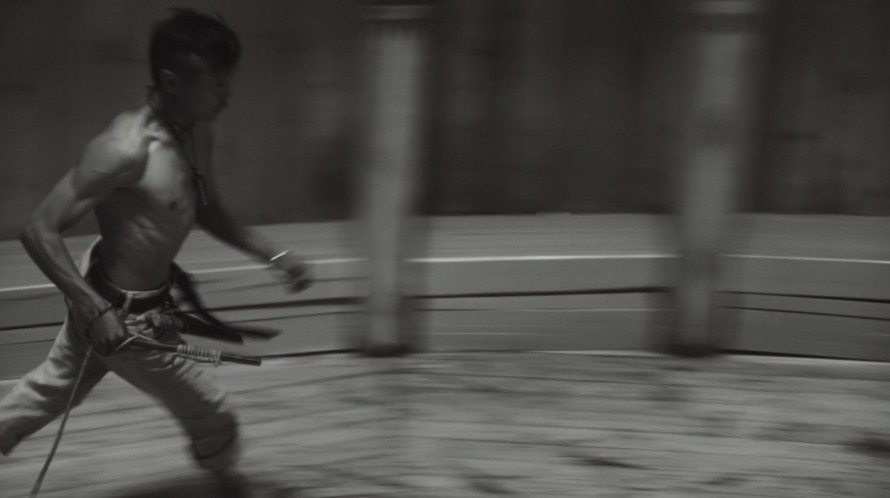 Another central motif is the special forms of spirituality...

AK: Yes, this motif has been with us from the start. Alongside the different relationship with nature, another hallmark of many Indigenous cultures is a special form of spirituality. We already witnessed this last year in our focus on Latin America. Shamanism, the existence, perception of and coexistence with spirits play a big part. Many Indigenous cultures take this as a given.

MR: Our title in the Berlinale Journal is "Everything is Connected". I think that sums up the perception of nature, religion and spirituality in Indigenous cultures. Since colonial times, Indigenous people have often blended religions, creating hybrids of Christian rituals and their original spirituality. This is not only the case in the Arctic but also in Latin America and other regions.

AK: A good example of the vitality of the myths that play a very big role in oral cultures is Johogoi Aiyy (God Johogoi). It depicts the Ysyakh summer festival in Sakha. The horse-god has a special place in the culture there because horses are the most important animals. The horse-god is as much a part of reality as the horse itself. His appearance before the protagonists, initiates the film’s love story in the first place. Director Sergei Potapov adroitly intertwines the different levels. The festival, the myth, the big love affair – everything comes seamlessly together. Such an interweaving of reality and spirituality can be found in many NATIVe films.

MR: It is extremely important for us to show these stories in NATIVe. Storytelling is a fundamental building block of all Indigenous cultures. Their narratives also allow them to resist. The forms in which they tell stories are extremely diverse, their structures and lengths vary. Indigenous narrative cultures often deviate greatly from our expectations of stories and dramaturgy. For a few years now the Sámi have been offering fellowships for young filmmakers so they can learn how their stories can be converted into film material. This can by no means be taken for granted because the form of their narratives is often not easy to transmit outside their communities. The Sámi, for example, tell stories in 42 cycles. From our perspective it may seem that they’re simply not getting to the point. How can a film be developed out of such cycles? That is a great challenge for Indigenous filmmakers around the world. In NATIVe we invite the filmmakers to Berlin. We offer them a forum for discussion on an equal footing. And we can learn an awful lot from them.