In 2016, the Retrospective is dedicated to the year 1966, an era dominated by the spirit of change in German cinema: a young generation of filmmakers from both West and East were turning their clear-sighted gaze upon the present and scrutinising social developments. However, whilst New German Cinema was enjoying success in the West, in East Germany, following the 11th Plenum of the Central Committee of the Socialist Unity Party (SED), around half of all films which should have appeared in the cinemas in 1966 were banned. From then on, the cinematic perspectives diverged completely. But as Rainer Rother says in this interview, the Retrospective’s overview of the cinematic year 1966 now reveals how much in common films from East and West Germany had at that time. 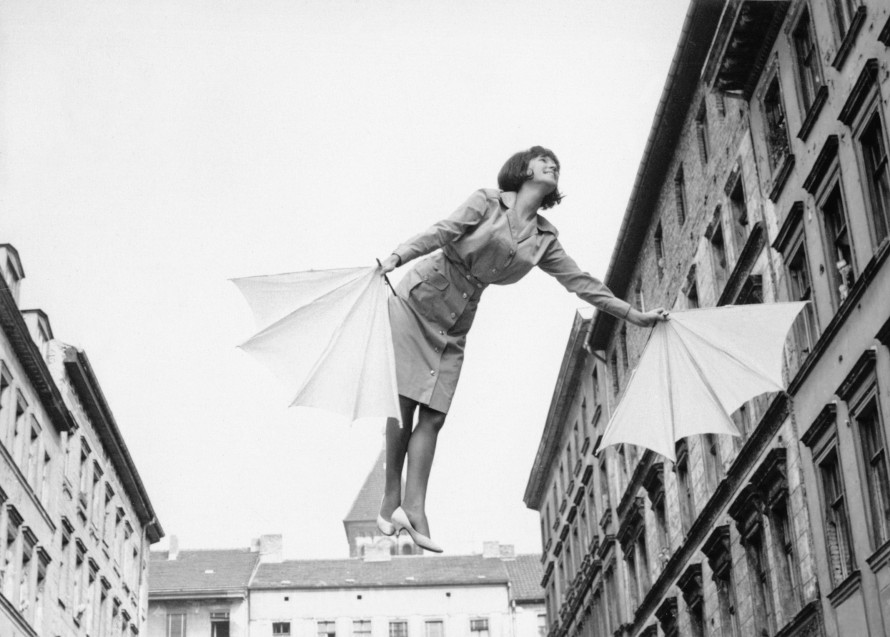 To begin, could you outline the historical context of this year’s Retrospective? What was the situation for filmmakers in the divided Germany in the mid-1960s?

First of all, two developments have to be viewed separately. During the 1960s, new artistic ground was being broken in both Eastern and Western Europe: in France by the filmmakers of the Nouvelle Vague, which had a huge influence on West German cinema; in Eastern Europe by directors like Andrzej Wajda and Roman Polanski in Poland or Miloš Forman in Czechoslovakia, all of whose early films can be classed as being part of a “New Wave”. Filmmakers in the East and the West reacted to this impetus to regenerate cinematic expression in their own particular ways. In West Germany there was a distancing from conventional narrative cinema, as was expressed in the Oberhausen Manifesto of 1962. In a survey by the East German academic film journal “Filmwissenschaftliche Mitteilungen” in 1965, many directors and writers from the DEFA film studio revealed their fascination with the Eastern European “New Wave”, and a film like Konrad Wolf’s Der Geteilte Himmel (The Divided Heaven) even drew upon it with great virtuosity.

The background was politically shaped by the construction of the Berlin Wall in 1961. The illusion of now being able to tackle national problems in an unvarnished way was, however, quickly dispelled. With the 11th Plenum of the Central Committee of the Socialist Unity Party of Germany in December 1965, it became clear that a reformation of the system from within would be impossible and that there would be no chance for authentic contemporary filmmaking in the future.

But before the year 1966 was to become a turning point, there was a spirit of change amongst filmmakers from both the West and the East and they shared many artistic similarities...

This parallel departure into the “new” was something of which contemporaries were, of course, not fully aware. It can only be discovered in a retrospective overview of the cinematic year of 1966 now. Because on the one hand, due to the import politics in the East and the West, little was known about cinematic works from the other part of Germany. And on the other, the emergence into a new era of filmmaking in East Germany was invisible even to its own cinema audiences, because these films were banned and could not be seen until 1990. 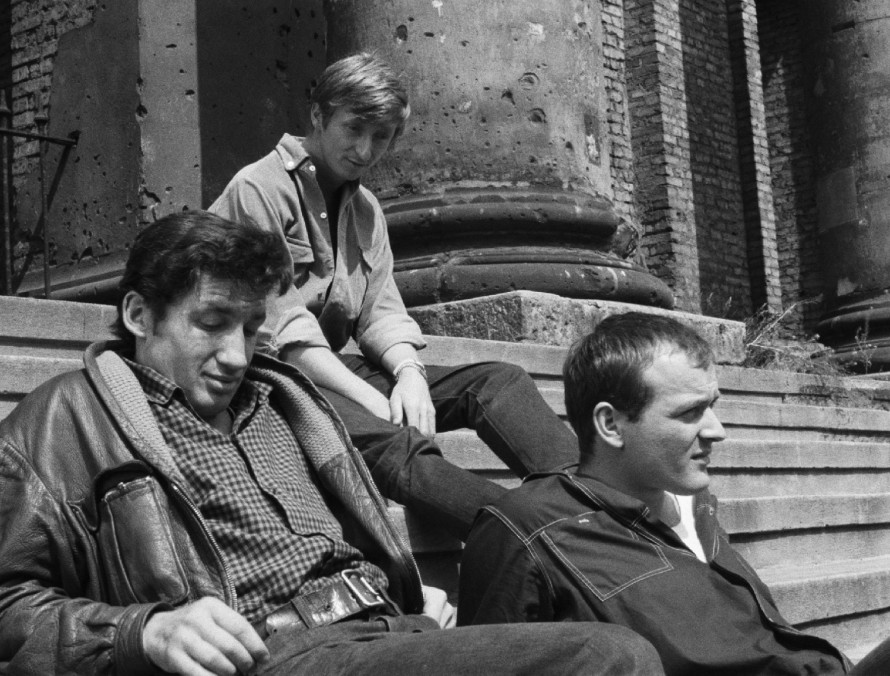 Turning towards the Present

What was new about the cinematic output in the East and the West?

The overwhelming majority of films explore contemporary subject matters, and this is clearly reflected in their cinematic language. In both parts of Germany, fictional and documentary material become interwoven through a very precise observation of the characters and a focus on the moment. In Jahrgang 45 (Born in ’45, Jürgen Böttcher, GDR 1966/1990), West German tourists get off a bus and take photos. It is a found scene which Böttcher skilfully edited into his feature film footage shot in Gendarmenmarkt in East Berlin so it looks as if his protagonists and the tourists are observing each other.

And, generally speaking, DEFA productions as well as auteur films from small independent production companies in the West were no longer filmed exclusively in the studio but instead went out on location. 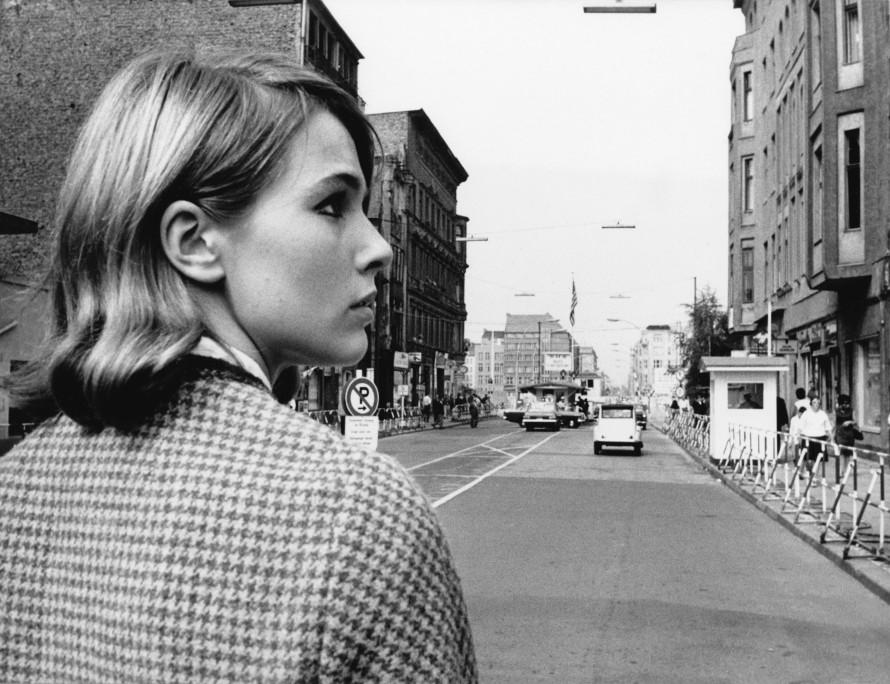 This location shooting was in turn accompanied by a new attention paid to the surroundings, especially to the cities still marked by war. On either side of the Wall, Berlin was an important location: in Es (It, Ulrich Schamoni, West Germany 1966) estate agents try to sell properties as a lucrative investment to West Germans. Playgirl (Will Tremper, West Germany 1966) is a tour through West Berlin with its architecture of the late 1950s and early 1960s, all very chic and not at all dilapidated. In Fräulein Schmetterling (Miss Butterfly, Kurt Barthel, GDR 1965–66/Germany 2005) the new buildings symbolising modernity on Karl-Marx-Allee, formerly Stalinallee, are contrasted with a neighbourhood of crumbling old buildings, and in Jahrgang 45 dingy backyards in the city centre with half-finished high-rises on the outskirts.

The free acting style of the performers is also remarkable. Many filmmakers had the courage to work with unknown actors or even with non-actors. And so the new focus on the present is quite multifaceted. 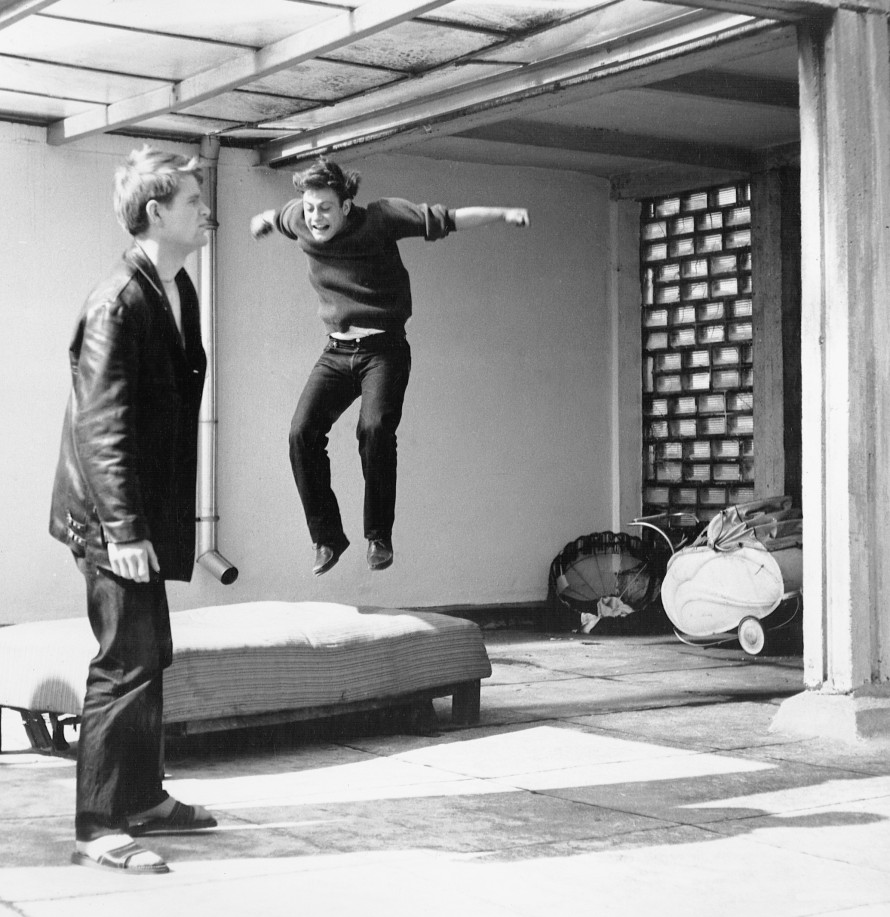 What are the characteristics of the people in the films? Do the films relate to their present with a combative attitude, a tenor of hope, or is there a rather resigned atmosphere?

In the DEFA films the characters are combative in so far as they want to break up the more rigid aspects of their society without completely abandoning socialism. There is the rebellious foreman Balla, played by Manfred Krug in Spur der Steine (Trace of Stones, Frank Beyer, GDR 1965/66), the character of Olaf, played by Dieter Mann in Berlin um die Ecke (Berlin Around the Corner, Gerhard Klein GDR 1965–66/1987 and 1990) or Karla, played by Jutta Hoffmann in the film of the same name by Hermann Zschoche (GDR 1965/66) - characters who clearly recognise some deficiencies and want to rectify them. Naturally they come up against opposition in their surroundings: families, colleagues, managers. But, unlike in the West, potential solutions are actually shown in the DEFA films. 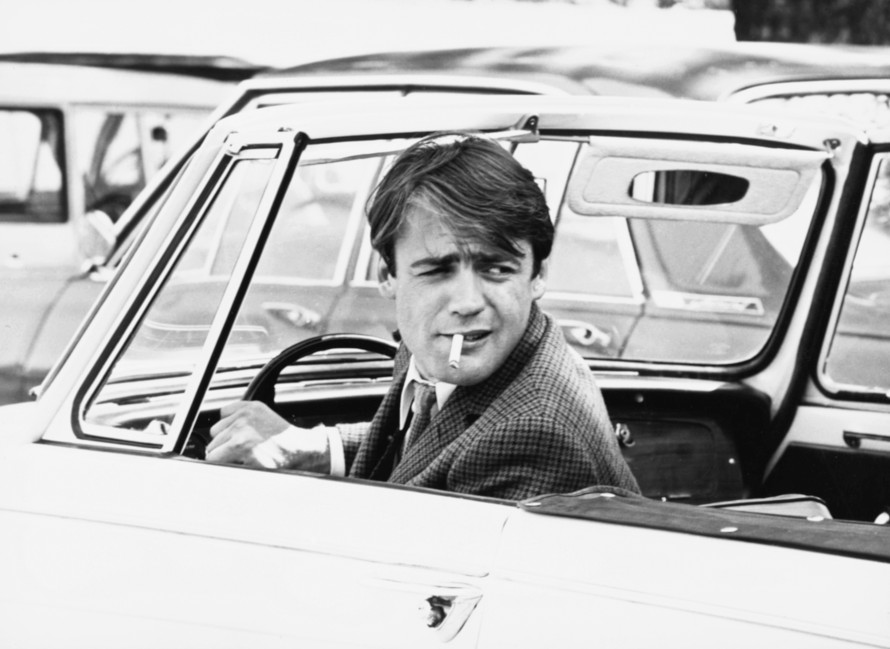 In the West German films the protest is much less concrete. In Klammer auf Klammer zu (As an Aside, Hellmuth Costard, West Germany 1966) a young man, played by Klaus Wyborny, wants to leave the country after the 1965 general elections, but soon returns to Hamburg. In Der sanfte Lauf (The Easy Way Out) by Haro Senft (West Germany 1966) Bernhard, played by Bruno Ganz, struggles with his own internal resistance but then compromises and grabs the chance to make a career. In this way, many of these characters have an element of uncertainty about them.

You would not necessarily expect drifters to appear in East German films. And yet there are also characters like this in DEFA productions, for example in the aforementioned Jahrgang 45 or in the short film Die Verantwortung (Responsibility) by Kurt Tetzlaff (GDR 1966).

Are the revolts of 1968 already making themselves felt in the films from the West?

A very particular situation is expressed in the films from 1966: the protagonists find themselves in limbo and are coming to terms with situations with which they don’t necessarily agree. Clashes between the generations would only become exacerbated in the following years. Incidentally, you can also notice this in the music. In many films in the Retrospective jazz is the expression of a culture whose intellectual influence is distinguished from the rebellious attitude of rock music. The big socio-cultural caesura of the 1968 revolts hadn’t happened yet. 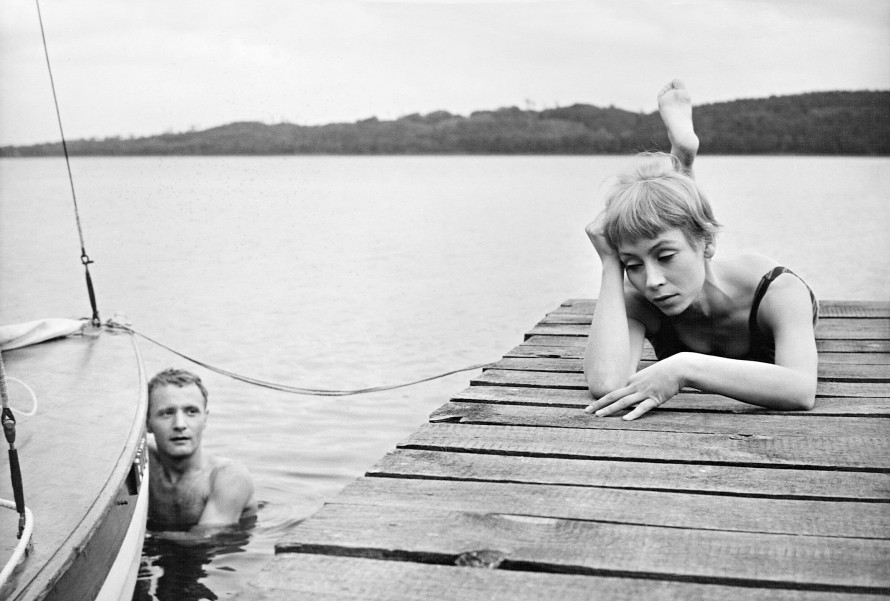 Do the conflict lines only run between the individual and society? How about the relationships between couples?

The relationship between the sexes is dominated by uncertainty; they are very seldom joined together in marriage or fidelity. In this regard, the female characters are particularly interesting, in both the West and the East. For example, Es by Ulrich Schamoni is not just about an unmarried couple and their problems. The film revolves around Hilke as a woman who is unable to talk to her boyfriend about her pregnancy and consequently makes a decision on her own. And in the DEFA-produced Karla by Herrmann Zschoche, the eponymous heroine not only proves her character through her “illegitimate” love for the former journalist Kaspar but also by entering into conflict with the teaching collective because she wants to raise her pupils to become emancipated human beings.

By the way, in most DEFA films the fact that women have careers is a matter of course, unlike in the West. But the films are united in posing the question of personal happiness.

What role does work play in respect of society?

Walter Ulbricht, the Chairman of the State Council of the GDR, had introduced the “New Economic System of Planning and Management” in 1963. Individual businesses were granted more discretion in their decision-making processes in order to reform the inflexible system of the planned economy and to make the East German economy more competitive internationally. Artists in the GDR also hoped for more latitude but the 11th Plenum, at which for example Wolf Biermann was pilloried, ended this hope.

As a consequence, the depiction of problems in everyday production such as in Berlin um die Ecke or the hardships of work, as shown in the short documentary Es genügt nicht 18 zu sein (Being 18 is not Enough, Kurt Tetzlaff, GDR 1964–1966/1990), caused the films to be banned. The Party was in denial about deficiencies in society, never mind having them critically scrutinised, because officially they were already considered to be “solved”.

In the West, a first recession in 1966/67 interrupted the steady economic growth. This caused a reality shock that reverberated in those films which challenged the idea of economic profit being the only saving virtue, as in Peter Schamoni’s debut film Schonzeit für Füchse (No Shooting Time for Foxes, West Germany 1965/66) or in Der sanfte Lauf. 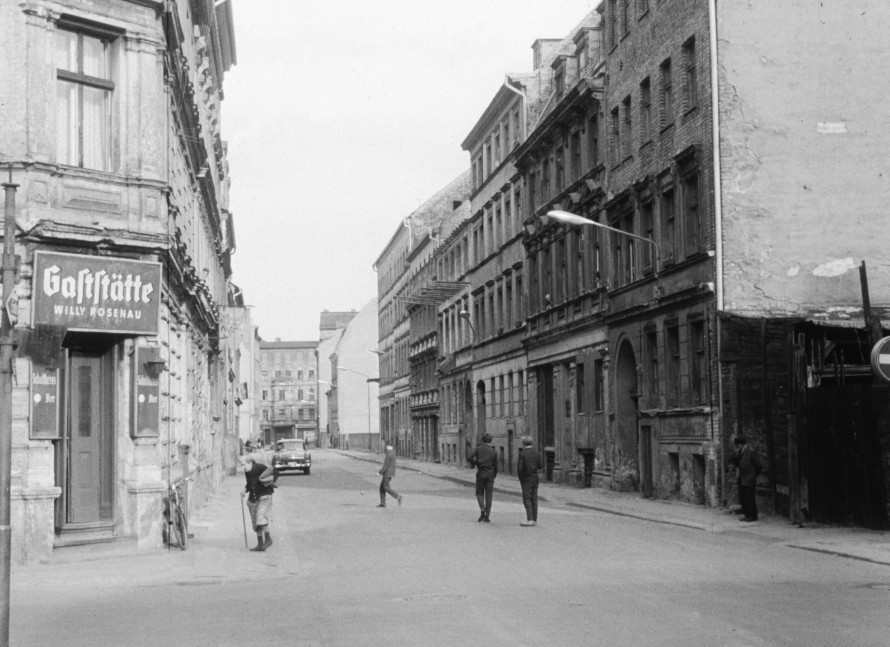 On the subject of “film heritage” – what are the highlights of this year’s Retrospective?

As part of their “Accessible Film Heritage for the Blind” project, Deutsche Hörfilm are providing audio descriptions for four screenings, supported by the Federal Government Commissioner for Matters relating to Disabled Persons. And we are delighted to be presenting new prints or digitised films. The Retrospective films by Alexander Kluge, Edgar Reitz, Volker Schlöndorff and Peter Schamoni are all being shown in digital versions. A new print of Christian Rischert’s Kopfstand, Madam! (Headstand, Madam!, West Germany 1966/67) has been created for the Berlinale by the Deutsche Kinemathek in cooperation with the Federal Film Archive. Alongside these classics of New German Cinema, the Retrospective is also presenting virtually unknown works like the short documentary Berlin Klammer auf Ost Klammer zu (Berlin Open Bracket East Close Bracket, West Germany 1966), by West Berlin filmmakers Fritz Illing and Werner Klett, which was filmed in the Eastern part of the divided city; or the short film Die Koffer des Felix Lumpach (Felix Lumpach’s Suitcases, West Germany 1966) directed by Gerd Winkler. So the audience can discover some real rarities.