My Name is Oona

‘My name is Oona,’ says the little girl at the beginning of the film and she will repeat it in a loop throughout the movie. ‘Oona’ means: the unique one, the fairy queen. She’s the daughter of filmmaker Gunvor Nelson, who observes her at play in My Name is Oona while reflecting to a certain extent on her own childhood. We experience Oona in her social surroundings, with her friends, fighting, riding horses. Using a wide array of recording, developing and editing techniques, Nelson reduces the action to the essential, lending the film an expressionist touch. As such, it is never about depicting a realistic representation of a syrupy childhood, but instead about the abstraction of childhood itself. Oona rattles off the days of the week aloud. A male voice interrupts her list, frustrating Oona’s system and her reasoning. Oona only lets herself be side-tracked for a second, then she’s back at it again. Steve Reich, who produced the soundtrack for the film, loops the signals, creating an acoustic counterpart to the concrete situations. The chirping of a bird can be heard, a woman singing softly, perhaps a lullaby, familiar. Oona keeps going. Maike Mia Höhne
‘I think that her world and that of my childhood are mixed in the film. As a child you feel pretty secure in your own world, but the rest is mysterious and scary – maybe monster and trolls are waiting there outside, even if you’ve never seen them before.’ Gunvor Nelson

Born in Stockholm, Sweden in 1931, she grew up in Kristinehamn and studied art in Sweden and the USA. During her studies she met Robert Nelson whom she married in 1958. In 1965 she made her film debut with Schmeerguntz. She lectured at San Francisco State University and San Francisco Art Institute before, in 1993, returning to Sweden. She has received numerous prizes and grants and her films have screened at MoMA in New York, the Moderna Museet in Stockholm and in many European and North American cinematheques. In 2008 she was awarded an artist’s lifetime income guarantee by the Swedish Arts Grants Committee. 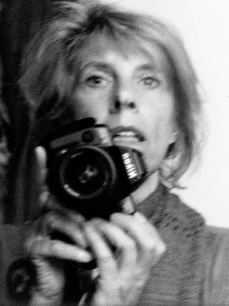