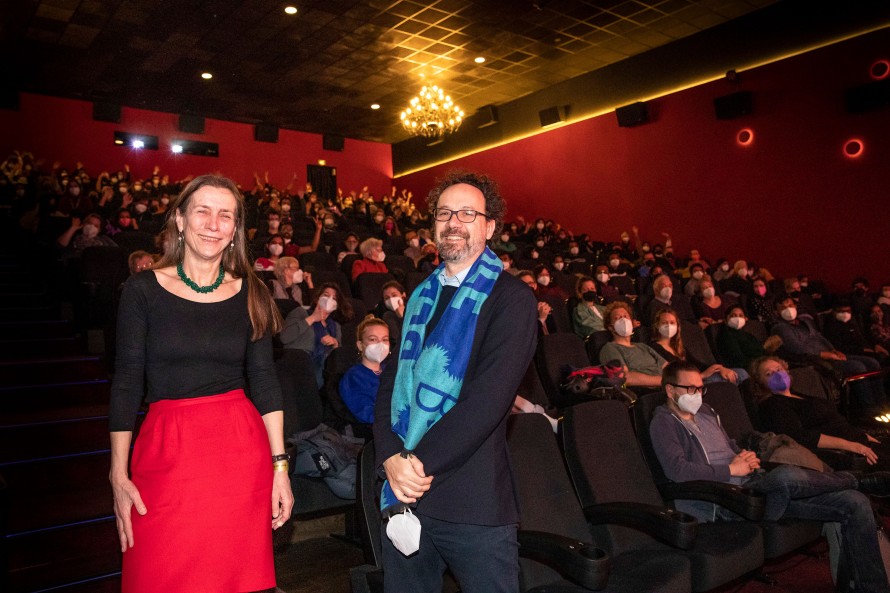 On the last day of the festival, Berlinale director duo Mariette Rissenbeek and Carlo Chatrian bid farewell to the audience at the Cineplex Titania cinema

On Sunday, February 20, the 72nd Berlin International Film Festival rounded off successfully with numerous audience screenings. On the last day of the festival, Berlinale director duo Mariette Rissenbeek and Carlo Chatrian bid farewell to the audience at the Cineplex Titania cinema (former Titania-Palast) - the very setting in which the festival was held for the first time in 1951.

Despite the ongoing pandemic, the Berlinale 2022 was able to take place as an in-person festival in compliance with a strict hygiene and security concept and the organisers were delighted with the lively interest shown by the public and trade visitors. Due to the pandemic, only 50 percent of seats in the cinemas were occupied. This stipulation was enthusiastically accepted and a total of 156,000 tickets were sold. The Berlinale also took to the spotlight as a media event. Despite numerous international travel restrictions, around 1,400 journalists from 65 countries came to Berlin to report on the festival.

In 2022, the festival took place in a different format: From February 10 to 16, film teams from abroad presented their films to the public and accredited audiences at the premieres. On the evening of February 16, the festive Award Ceremony (3.9 MB) already took place in the Berlinale Palast, culminating in the presentation of the Golden Bear to Alcarràs (director: Carla Simón). From February 17 to 20, the public had an opportunity to see the Berlinale films in repeat screenings during the “Publikumstage” (“audience days”).

“The successful conclusion of the Berlinale 2022 gives us great pleasure and confidence for the future. Sharing a cultural experience is possible even in times of pandemic; indeed, it becomes especially important then. We intended to fly the flag for cinema with this year’s festival, and we were thrilled to receive so much support for this from audiences and filmmakers alike,” comment Mariette Rissenbeek and Carlo Chatrian.

While the festival was able to take place in person, the European Film Market (EFM), the Berlinale Co-Production Market, Berlinale Talents and the WCF Day of the World Cinema Fund were realised primarily as online formats.

At the WCF Day on February 16, 2022, the panels and discussions focused on the development of funding and decolonisation strategies. With its differentiated funding programme, the World Cinema Fund has been working to promote cultural diversity, cooperation, sustainable development and the promotion of cinema in regions with weak film infrastructures since 2004, and thus aims to contribute to the democratisation of international filmmaking.

The recording of WCF Day 2022 is available online: https://www.youtube.com/watch?v=w0oIbLnJvLU

1,438 pre-arranged and specially planned individual meetings with interested co-producers and financiers took place at the Berlinale Co-Production Market for the feature film and series projects selected in 2022. Three cash prizes were awarded to new projects. The pitching events “Co-Pro Series” and “Books at Berlinale” as well as the talk formats were also very popular with the 574 participants. Alcarràs by Carla Simón was the second former Berlinale Co-Production Market project to win the Golden Bear. In 2019, the project had already won the Eurimages Co-Production Development Award.

The 73rd International Film Festival Berlin will take place from February 16 to 26, 2023.