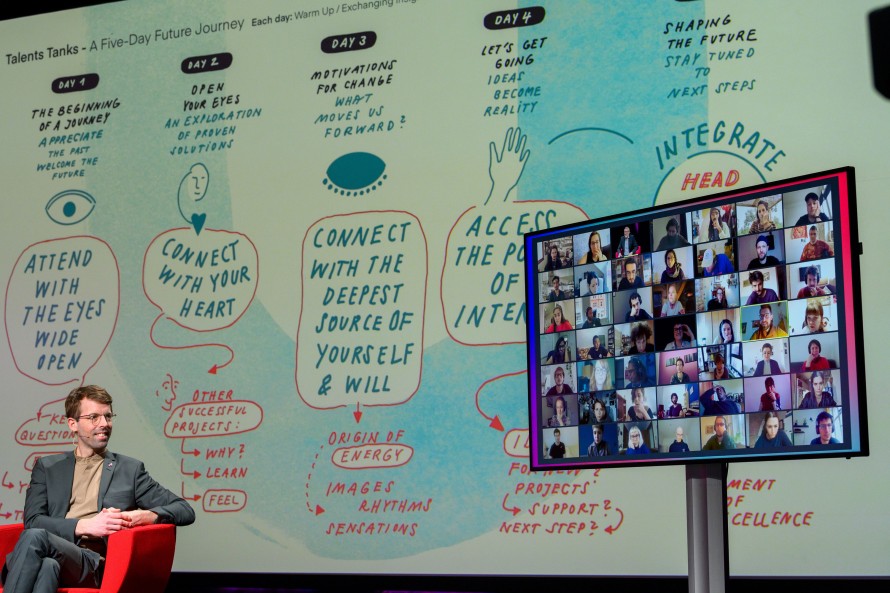 Florian Weghorn at the Talents Tanks

The 20th anniversary edition of Berlinale Talents ends on a high with alumna and Golden Bear winner Carla Simón (Alcarràs), and having established a clear mission for the future. The six-day summit, with talks for thousands of online viewers as well as workshops and the new daily think tank Talents Tanks for the 200 participants from over 70 countries, emphasised the desire to create more sustainable communication channels.

The Minister of State for Culture and Media, Claudia Roth, visited Berlinale Talents and encouraged the participants: “20 years of talent development à la Berlinale – this success story sums up plenty of unforgettable experiences, encounters and films that originated in Berlin. It’s also a story that will be continued with you today: like no other before, your generation is diverse, engaged and deeply committed, whether it be on topics of freedom of speech or anti-racism, in the way you set up your crews, or how you help to bring about positive change to your societies.”

All of the corresponding talks on the “Labours of Cinema” theme also gave Talents and alumni their voice in the public sphere: sociologists Jutta Allmendinger and Lisa Basten engaged in a lively discussion with an international delegation of Talents on their income levels in relation to gender and educational backgrounds. The equal participation of all film disciplines in the artistic decision making processes was the focus, for example, of the session with the currently Oscar-nominated alumna and cinematographer Ari Wegner. The guests acknowledged the responsibility and opportunity of the next generation for change. Isabelle Huppert, for example, though unable to join at short notice, addressed the Talents directly: “The collaboration with emerging filmmakers has always played an important role in my work, and I think we can learn a lot when we are open to new perspectives. This is why I was very much looking forward to entering into dialogue with you and feel connected in our shared visions for cinema. Even if we weren’t able to meet this time in person, I send my gratitudes and warmest greetings to each one of you, wherever you are around the globe. I am sure we’ll see each other again!”

In the new Talents Tanks, the 200 Talents from 13 film disciplines worked methodically in small groups throughout the week on four themes:

The results and next core questions were brought together daily in a plenary session and discussed live with the Talents Tanks partners, the German Federal Foreign Office, Telefilm Canada, Netflix and Medienboard Berlin-Brandenburg. The methodical approach appealed to all senses. A highlight for many Talents was a continent-spanning meditation session to strengthen their own resources and recognise the inner forces for change. The desire was repeatedly expressed to adopt methods like these also in the work on the set and in team development.

The structure as well as the results of the Talents Tanks are documented. For the Talents Footprints - Mastercard Enablement Programme, which is also committed to sustainability, three new fellows were chosen. Berlinale Talents also substantially improves the working conditions of creative professionals with the Kompagnon Fellowship, which is awarded together with the Berlinale section Perspektive Deutsches Kino.

The pilot of the Talents Tanks has been successful and the heads of Berlinale Talents, Christine Tröstrum and Florian Weghorn draw a positive summary: “Meanwhile, there is great agreement on the relevance of fair, diverse and ecologically considerate working methods in the crews as well as on artistic freedom in cinematic storytelling. But we experienced a new urgency in this festival: the current generation of filmmakers offers concrete solutions and demands to be able to take creative responsibility, globally as well as locally and at eye level with streamers, funders and institutions.” As a bridge builder and door opener, Berlinale Talents will therefore connect its community of soon to be 10,000 alumni with each other and with the industry via further collective and decentralised dialogue formats throughout the year.

Berlinale Talents is an initiative of the Berlin International Film Festival, a division of Kulturveranstaltungen des Bundes in Berlin GmbH, and is supported by the Minister of State for Culture and Media, Creative Europe - MEDIA Programme of the European Union, Medienboard Berlin-Brandenburg, German Federal Foreign Office, German Federal Film Board, Mastercard and ARRI.