“It all began when a boat moored in Guinea, carrying people of light colour, with green and blue eyes and weapons on their backs”, yells a man into the dark of night in fury. “What did those people want? They came to buy children from Guinea, and why? In order to sell them on the other side of the ocean. Some call it work, I call it slavery.” The stylistic device of the direct address as a reduced form of Greek tragedy chorus expresses the urgency of the concerns, rendering costumes superfluous. Vincent Toi’s film takes the historic figure of Franswa Mackandal, who in the 18th century was abducted and taken to Haiti as a slave, only to become the leader of a revolt against the French colonial rulers, and re-enacts his plight in a contemporary work context. Mackandal sees through the mechanisms of power and logic of violence, both then and now. The implementation of violence is not debated in today’s workplaces, it is practised: from top to bottom. Mackandal refuses to accept it. He remains undaunted. He is astonished. Wandering around the island he becomes, when a woman asks for his help, a midwife. As she holds the child in her arms, he comprehends the strength which lies in endurance.
by Vincent Toi
with Zidor Montal, Ebby Angel Louis, Lovena Dieudonné Canada 2017 Haitian Creole 20’ Colour 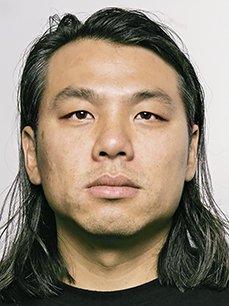 Born on Mauritius in 1981, he moved to Canada at the age of 19 to study design in Toronto and filmmaking in Montreal. He is currently an art director at two major art institutions in Canada, the Phi Centre and the DHC/ART Foundation for Contemporary Art, both in Montreal. His most recent feature-length documentary I've Seen the Unicorn screened at numerous international festivals.