Thick fog lies over the Rio Apa, the river that runs between Brazil and Paraguay. The bodies of dead men float downstream. But the 13-year-old Joca is in love with the mysterious alligator girl Basano of the Guaraní people, who lives on the opposite shore. But it is not only the river that separates the young Brazilian from his first love: There are also scars from the past, battles between the rival biker gangs: Joca's older brother, a reluctant gangster, and Basano's cousin, who wants her for himself. Set to the sounds of revving engines in the diffuse light of the swamps, Bragança portrays the attitudes and lives of a fearless generation in a modern Romeo and Juliet story.
by Felipe Bragança
with Eduardo Macedo, Adeli Gonzales, Cauã Reymond, Zahy Guajajara, Cláudia Assunção, Marco Lóris, Márcio Verón, Leopoldo Pacheco, Ney Matogrosso Brazil / Netherlands / France 2017 Portuguese, Spanish, Guaraní 108’ Colour 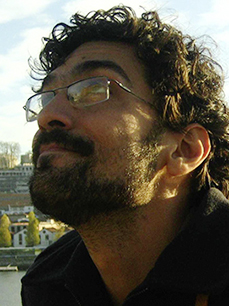 Born in Rio de Janeiro, Brazil in 1980, his short films and experimental features – often made in collaboration with creative partner Marina Meliande – have screened at high-profile festivals including two outings in the Berlinale's Forum Expanded programme. He regularly works with Karim Aïnouz as an assistant director and screenwriter, as he did on the feature film Praia do futuro which screened in the Berlinale Competition in 2014. In the same year Bragança was invited to participate in the DAAD Artists-in-Berlin programme, during which he developed the screenplay for Não devore meu coração!