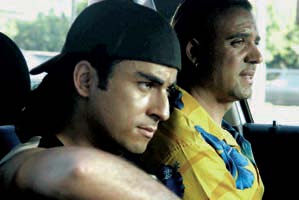 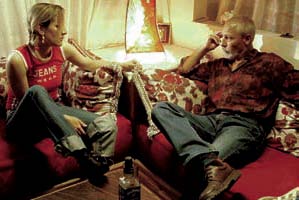 An evening in Casablanca. Ney is on his way to his victim’s apartment in search of revenge. The attack will throw the lives of three people completely off the rails. Ney feels responsible for his little sister and his blind mother. At first he works on building sites, but, when he finds out what two of his best friends are earning with their shady deals, he too decides to cast aside all of his good intentions. He signs up with Mansour, the most powerful boss around, and soon makes his way. Ney’s mother is anything but pleased. On one of his jobs, Ney becomes embroiled in a shoot out from which he only manages to escape with his life. Ney’s mother is about to have an operation that will help her regain her sight when Mansour tells Ney the names of the men who shot at him. And so, Ney sets about preparing for the day when he can avenge himself.
Ever since her husband’s accidental death, an American woman named Lisa has been living alone in Casablanca, trying to numb her grief with bourbon, and stave off her loneliness with a lawyer named Jalil, who has no family. When she learns one day that a murder has made her the only surviving family member for Suad and Jalim, Lisa’s life changes forever.
Smail is released from prison after having served a sentence of fifteen years. He was put behind bars because of old friends who betrayed him. He now has but two wishes: to see his terminally ill mother – and to take his revenge. An old friend – the man who should have been Smail’s brother-in-law – gives Smail the information he needs. But the people Smail meets manage to open his eyes, and he decides to turn over a new leaf.