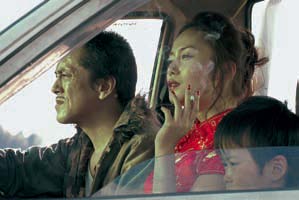 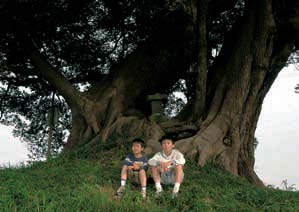 Shuji and Eri are in the same class at school. One day, when Shuji is attending a Christian church with a friend he notices his classmate Eri, who is his age. Eri is an orphan, her parents committed suicide. Over the next few months the two 15-year-olds become friends.
Shuji is overshadowed by his older brother, who tells him that Pater Yuichi, in whom he has also found a good friend at the church, is alleged to have a criminal past.
Meanwhile, Shuji’s native town Hama is being turned into a holiday resort. The place is flooded with property speculators and investors and in no time property prices begin to soar, forcing the local population to find cheaper places to live. One evening, a passing lorry loses its load and Eri, who happens to be in the area, is struck by a falling piece of rock and badly injured. The money they receive in compensation enables Eri’s relatives to move away to Tokyo, taking Eri with them.
Shortly afterwards, an economic crisis causes the construction work to come to a halt – even though the new buildings are only half-finished. Shuji’s life also takes a downward turn. Increasingly isolated at school, he drifts into crimi­nal activities and refuses to let anyone – even Pater Yuichi – help him.
Longing to be reunited with Eri he sets off for Tokyo. After a series of nervewracking and nightmarish experiences with the prostitute Akane and the gangster Nitta he finally manages to track her down. And so they meet again, two souls in desperation…