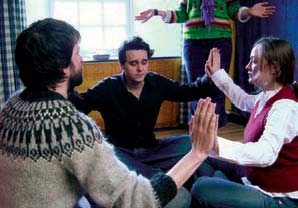 Alistair McIntyre, a sales assistant at a department store in Glasgow, has a secret that he cannot divulge. He and his sister grew up in a hippy commune in Spain. Sixteen years ago, after a big row with his parents, Alistair was dumped on a dusty country road in Granada. That was the last time he saw Cristina. He now discovers that she is living in a commune in the Scottish highlands. He turns up, with a film crew in tow, and, although she is absolutely happy here, Alistair is determined to save her…