The Love Crimes Of Gillian Guess 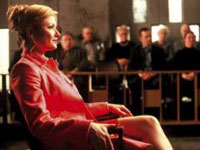 THE LOVE CRIMES OF GILLIAN GUESS

Prior to 1995, Gillian Guess was an ordinary single parent. But then, one day, she was called up for jury service on a criminal case. The case to be tried were the murders of two men involved in Vancouver’s drug scene. There were six men in the dock. Gillian Guess started having an affair with one of them, his name was Peter Gill (he was later convicted and sentenced). Not only did Gillian’s entanglement dominate the headlines of the tabloids for months on end, she was also obliged to answer for her behaviour before the court. In 1998, Gillian was convicted for “obstructing the path of justice”, to which she commented: “I haven’t committed any crime. I just fell in love, that’s all.”
This sensational case is at the heart of Canadian director Bruce McDonald’s rampant satire. McDonald uses Gillian’s television appearance in the fictional “Bobby Tomahawk Show”, during which she faces questions fired at her by an impertinent chat show host, as a starting point in order to recount events as he sees them. Making use of a whole range of technical options – from grainy Super 8mm footage to animated film – as well as a mixture of genres from romantic comedy, passionate love story to surreal musical, McDonald tells the tragic story of a woman who, despite being lonely and misunderstood, was nonetheless brave.