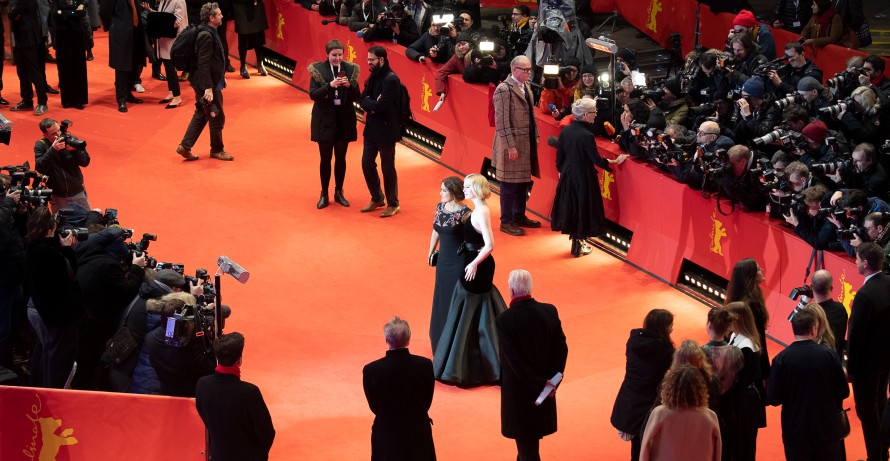 Salma Hayek and Elle Fanning at the Red Carpet during the 2020 Berlinale.

After a vibrant, international festival summer that once again brought stars, fans and industry together in celebration, the Berlinale is pleased to present the festival as an on-site event in February 2023 – following two altered festival years due to the pandemic.

Russia’s war of aggression against Ukraine, which violates international law, continues to cast a shadow over the world. Like numerous cultural institutions worldwide, the Berlinale has expressed its solidarity with Ukraine.

“Film festivals are places that strengthen freedom of speech, freedom of expression, and peaceful dialogue. With the ongoing war of aggression against Ukraine, and the courageous protests and liberation struggles in Iran, the 2023 Berlinale stands even more firmly for these democratic values, and remembers victims of war, destruction and oppression all over the world. As a public festival, the Berlinale stands for diversity in participation. In 2023, face-to-face encounters, community film experiences, and space for artistic reflection will once again set a visible benchmark for active cinema culture”, say the directors of the Berlinale, Mariette Rissenbeek and Carlo Chatrian.

“While films are seen more and more on different devices, the Berlinale has been one of the first film festivals in showing series on a big screen as a collective experience. Thanks to the cooperation with Deadline, we now take a step forward. We are sure this award – the first in its genre for A Film Festivals – will contribute to highlighting the artistic value of a form that has deeply influenced the way stories can be told”, comments Artistic Director Carlo Chatrian.

Moving forward, the European Film Market, the Berlinale Co-Production Market, and the initiatives Berlinale Talents and World Cinema Fund will maintain their individual profiles while using the label Berlinale Pro* with the goal of pooling industry events within the Berlinale. The corresponding slogan captures the reality of the events: Where Cinema Culture and Industry Meet.

The activities of the four areas of Berlinale Pro* have always been characterised by collaborative work. Now, synergies will be further developed in order to make events more efficient and sustainable for creatives and industry alike. With opportunities and events for talent promotion, networking, project development, consultation, co-production, financing, audience development, marketing, sales, distribution and discourse, Berlinale Pro* already stands for “full service”. Berlinale Pro* bolsters the Berlinale’s position as an international agent within the entire value chain of filmmaking, while creating a comprehensive industry platform for innovation and sustainable change. This integrative model provides film creatives and industry reps with entry points into the Berlinale universe that suits their project and development status, as well as their professional level. With its individualised offers and a canon of common themes, Berlinale Pro* makes an even stronger commitment to participation and a more inclusive, sustainable film industry.

The festival and Berlinale Pro* are connected by an overarching culture of sustainability based on the UN’s 17 Sustainable Development Goals. The environmental conservation provisions applied by the Berlinale in its office routines year-round have already been evaluated annually since 2013, and the festival maintains the European environmental certificate EMAS. Since 2011, numerous measures in the festival’s configuration have been carried out to advance social, ecological and economic sustainability.