© sixpackfilm
Ja/Nein is part of the anthology ‘20 Action and Destruction Films 1965–1979’, which the filmmaker Ernst Schmidt Jr. describes thusly: ‘This anthology represents a self-contained work of 20 films with durations from one second to ten minutes and is based on experience gathered over 15 years of working with the medium of film. Films 15 to 19 are documentations of happenings staged by the Viennese actionists, including the sensational action at Vienna University in 1968, which led after weeks of demonization at the hands of the Austrian mass media to the arrest of “ringleaders” Brus, Muehl and Wiener, a subsequent trial and long prison sentences for Brus and Muehl as well as to the emigration of the Viennese actionists.’
The first part of the collection takes up practices from the realm of expanded cinema – featuring both real and projected curtains.
by Ernst Schmidt jr. Austria 1968 Silent 3’ Black/White 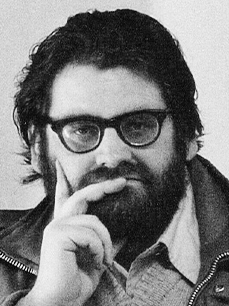 Born in Hadersdorf am Kamp, Austria in 1938, he died in 1988 in Vienna. He trained as a clerk at a commercial college before, between 1961 and 1963, studying at the film school of the Academy of Music and Performing Arts in Vienna. He became an independent filmmaker in 1963 and by 1986 had made over 50 short films. As a result of his efforts to establish film groups he met Kurt Kren and Ferry Radax. From 1966 he wrote about film for periodicals in Germany, Austria and Switzerland and published numerous theoretical works on avantgarde film. He was a founding member of the Austrian Filmmakers Cooperative and a co-founder of both the Grazer Autorenversammlung (1973) and the Austrian Directors’ Association (1979). His extensive estate is managed and researched by the Synema Society for Film and Media in Vienna.