© Kingulliit Productions Inc.
It is winter in Nunavut in the early 1900s. An intimate, lively celebration in an igloo is disrupted by four misbehaving hunters. An elder anticipates a bad omen, so the group decides to ban these men, as their egoistic ways are a threat to the community’s stability. The men wander off enraged, feeling superior and fearless, forgetting their tradition. Far away from this turmoil, Kuanana leads a tranquil and content nomadic life with his family. He is a man of unwavering spirit, patient and focused. He sets out on a hunting trip, unknowing that savagery will befall his home, when the brutal renegades kidnap his wife and daughter. Kuanana goes out for revenge. With striking cinematography that comfortably sways between the vast open ice and the warm enclosed mood in the igloos, a hypnotic soundtrack, and genuine characters, eminent director Zacharias Kunuk delivers a masterful and artistic Western: an Inuit Western.
by Zacharias Kunuk
with Benjamin Kunuk, Jocelyne Immaroitok, Karen Ivalu, Joseph Uttak, Joey Sarpinak, Jonah Qunaq Canada 2016 Inuktitut 94’ Colour 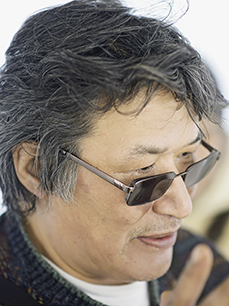 Born in Kapuivikn Nunavut, Canada, in 1957. In 2001, he won the Camera d’Or at Cannes for his first feature Atanarjuat: The Fast Runner. President and co-founder of Igloolik Isuma Productions, Canada’s first Inuit-owned independent production company. His feature The Journals of Knud Rasmussen, co-directed with Norman Cohn, opened the Toronto International Film Festival in 2006. He says that his professional education in filmmaking started and ended with an instruction given to him that he might recharge his camera battery.