© Marlies van der Wel
Sabaku and his buffalo buddy don't need big words to understand one another. Alas when his good-natured companion keels over in the savannah sun one day, Sabaku must find a new friend – after all, who wants to travel through this world all alone? In a simple yet poetic way, as in Zeezucht (Generation 2016), Marlies van der Wel tells the colourful tale of an unusual bird in search of a friend that might be able to understand him for real.
by Marlies van der Wel Netherlands 2016 Without dialogue 3’ Colour empfohlen ab 4 Jahren 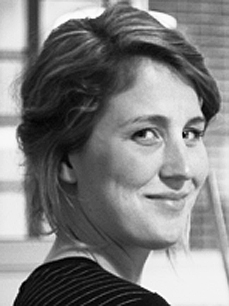 Born in Soest, the Netherlands in 1984, she founded a studio in Amsterdam for illustration and animation in 2007 where she works on her own personal as well as on commissioned projects. In 2016 her debut short animation Zeezucht (Jonas and the Sea) also screened in the Berlinale Generation programme.