Poi E: The Story of Our Song

© Patea Film Collective Ltd.
‘Do you know what the funny thing is? Everyone knows the song, but nobody knows the words.’ · ‘That’s right man... mmmhh Poi E.’

In 1984 a Maori popsong topped the charts in New Zealand. It was nothing short of a miracle that music with Maori language lyrics could achieve such success. It was the heyday of Tina Turner and Michael Jackson – and of course most songs were sung in English. But then along came Dalvanius Prime, an imposing Maori with a strong but silky smooth voice, and the singers of the Patea Maori Club. Prime had already established himself as a ‘black’ soul singer, then he began to mix traditional melodies with modern Beats. Although the media would have loved to ignore it, Poi E became a ‘hymn of a new generation’, ultimately encouraged many Maori to rediscover their roots and experienced a new hype in Taika Waititis feature Boy (Generation 2010).
by Tearepa Kahi
with Dalvanius Prime New Zealand 2016 English, Maori 94’ Colour Documentary form 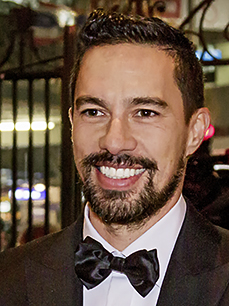 Born in Christchurch, New Zealand, this director of Maori heritage was discovered as an actor at the age of 17 and subsequently worked for two years with a Maori theatre troupe which toured throughout New Zealand. Having studied history and Maori studies at the University of Auckland, he has since directed a diverse range of documentaries and award-winning short films. His feature debut Mt Zion won several prizes at the New Zealand Film Awards and was a big commercial success in both New Zealand and Australia.