© MIMESIS
High up on the 14th floor of a tower block, a seemingly perfect family live in their spotless, shiny apartment. One fine morning, they find themselves faced with a bizarre dilemma: What should one do with a cow in the kitchen? It doesn't take long for the house-trained colossus to win the hearts of everyone in the family. Only Grandpa still has some serious misgivings. Before long, the family has to deal with another, decidedly macabre matter.
by Daria Vlasova
with Gleb Orlov, Yaroslava Bazaeva, Maria Bolonkina, Vitaly Khodin, Igor Yasulovich, Moorka Russian Federation / Lithuania 2017 Russian 16’ Colour 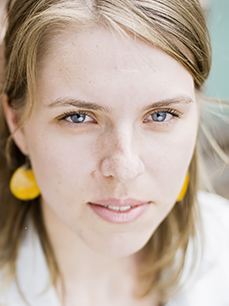 Born in Moscow in the then Soviet Union in 1988, she studied at the city’s Gerasimov Institute of Cinematography (VGIK). She has made several short films which have screened at Russian and international festivals, with Freemasons receiving a Special Jury Mention at the Kinotavr National Film Festival in Sochi. Whilst developing and producing Milk, she participated in the 2016 Interforum Berlin and the 2017 European Short Pitch.