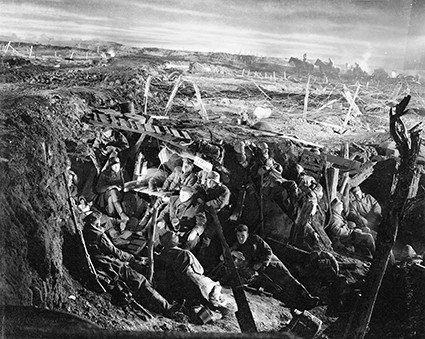 Source: NBCUniversal Archives & Collections, © Universal Pictures
The film picks up where the film of Remarque’s All Quiet on the Western Front (USA, 1930) left off, in November 1918. Despite the armistice, four German infantrymen are sent into a last, pointless battle. The road back to civilian life is difficult for the former soldiers. At home, they are confronted with disgruntled revolutionaries, traumatised comrades and war profiteers. They are barely able to talk about the horrors they experienced. Then hunger foments unrest and, in a twist of fate, it’s their former commander who uses bloody means to put down the revolt … Like all of Remarque’s books, “The Road Back” (1931) was banned in Nazi Germany. After the first previews and protests from the German side, in 1937 the studio made some cuts and re-edited James Whale’s film - including expanding some romantic and comic scenes. The director was not involved in that process. The Retrospective is screening a reconstruction of the 1937 theatrical release. – World premiere of the 35 mm restored version.
by James Whale
with John King, Richard Cromwell, Slim Summerville, Maurice Murphy USA 1937 100’