© Akram Zaatari
Dates
Whether they inhabit the desert or are lost in it, three men are clearly confronted with the ruins of modern times. They are explorers of times past or players/performers in an existing architectural site. Their encounters, their moves, their assessment of location take the form of an acoustic sounding of space. Al-Houbut takes place in Shaabiyat al Ghurayfah, a public housing project in Sharjah, United Arab Emirates built in the eighties to provide descendants of the Ketbi Bedouins with their first concrete homes. This site, now totally deserted, witnessed the first move of Bedouin families from tents into modern designed habitations.
The film unfolds as a repertoire of simple gestures, a few of which are inspired by the photographic documentation of performances by Hassan Sharif, playfully engaging with architecture, vegetation, space, movement, threshold, surveillance, and perspective. Cables, sewage pipes, tubes, shovels, kitchen tools, electric air blowers, and even a helicopter landing on site are all deployed in this film for their sonic rather than narrative potential – creating refractions, confrontations, and transformations in a broken-off, folded narrative.
by Akram Zaatari
with Sharif Sehnaoui, Ali Hout, Abed Kobeissy Lebanon / United Arab Emirates 2019 Arabic,  English 63’ Colour Documentary form 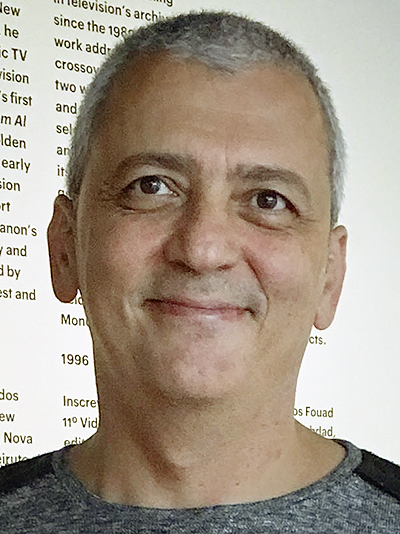 Akram Zaatari, born in 1966 in Saida, Lebanon and based in Beirut, has produced films and videos, all sharing an interest in writing histories and practices related to excavation, political resistance, the lives of former militants, the legacy of an exhausted left, the circulation of images in times of war. Zaatari has played a critical role in developing the formal, intellectual, and institutional infrastructure of Beirut’s contemporary art scene. As a co-founder of the Arab Image Foundation, he has made invaluable and uncompromising contributions to the wider discourse on preservation and archival practice. Zaatari represented Lebanon at the Venice Biennial in 2013 with his film Letter to a Refusing Pilot. His works have been shown all over the world in solo and group exhibitions.