“The cinematic kidney-shaped table.” – Rolf Becker in the “Der Monat” magazine on Ottomar Domnick’s film Jonas, the subject of much controversy at this year's Berlinale. 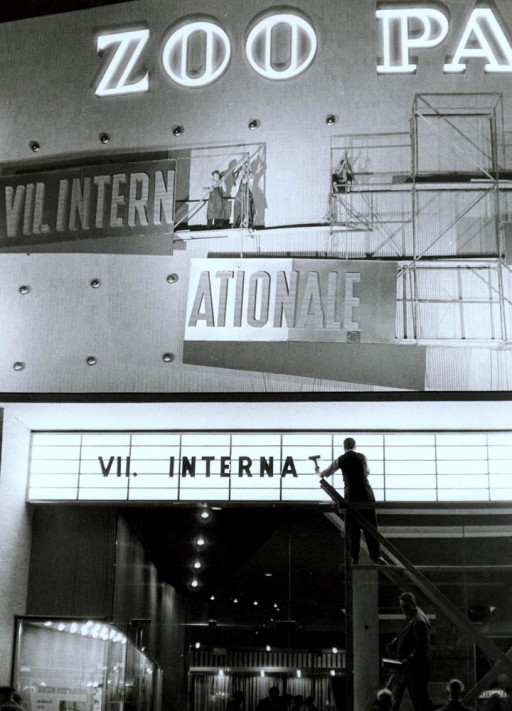 “Film festival in a new Berlin” is the slogan of the seventh Berlinale. New buildings are shooting up across the city. The international construction fair “Interbau” gives Berlin several new residential neighbourhoods – including the Hansa quarter in Tiergarten. Close by, the new “Congress Hall” – today known as the Haus der Kulturen der Welt – is built. The Berlinale also gets a brand new festival venue: the Zoo-Palast cinema near Zoologischer Garten station becomes the large inner city festival cinema, that Alfred Bauer had always wished for.

How international is this film festival?

The Berlinale’s credibility is coming under increasing pressure. The festival’s policy of categorically rejecting films from the so-called Eastern Bloc states is constantly criticized as being contradictory to the internationality that Berlinale refers to its name. After the festival in Cannes opens up to films from Eastern Europe and the film festival in Karlovy Vary also receives A status, the Berlinale is left internationally isolated with its policy of embargo. And yet especially the federal government still insists on the exclusion of socialist states. In the name of the “free world” it takes a much harder line than the opposing side, especially when it comes to dealing with the GDR.

The debate about political credibility also influences the evaluation of the festival programme. 1957 is considered a weak year in the history of the Berlinale, to a large degree because of the high expectations that came with the newly bestowed A status. The Berlinale grew up fast, but for many had not yet matured.

A festival for the critics

On the other hand, a cause for optimism is seen in the fact that the international critic’s association FIPRESCI holds its annual convention in Berlin and for the first time awards its own prize at the Berlinale – to the British production Woman in a Dressing Gown by J.Lee Thompson. A German film provides ample material for discussion amongst the critics: Ottomar Domnick’s Jonas, an aesthetically and in terms of narration unique film. For some it’s an unwieldy monolith in the landscape of German film, for others outdated avant-garde: in his review, Rolf Becker calls the film “Arrière-gardism”. Today Jonas can be considered a forerunner of the German auteur films of the 1960s and 1970s. At any rate, the film is an initial sign that selection policies of the Berlinale are getting more daring with regards to German cinema. And yet the festival management is still afraid of its own courage: Jonas is presented to the audience with an explanatory lecture. It is also felt that the press must by prepared for the “difficult” film with a special press conference.

However, the audience does not let all this ruin the fun: this year, Berliners’ favourite stars include Errol Flynn and his wife Patricia Wymore, Vico Torriani, Trevor Howard and Henry Fonda – and once again, “Hildejardchen"” Knef.