“Perhaps the esteemed ladies and gentlemen have not been sufficiently convinced that not only does Berlin need them, but that they need the metropolis, to have a more positive influence on their market value than the small, delicate Cannes or the festive decorum of Venice.” – Film critic Karena Niehoff gives the international film stars a talking to – they were notable at this Berlinale in their absence. The "Hotel am Zoo" in full festival armor

In its fifth year, the festival’s advertising expenditure jumps to 60,000 deutschmarks, equalling 15% of the festival budget. Alfred Bauer places highly visible outdoor posters advertising the film festival near the border to East Berlin. All venues and all the major streets in the western part of the city are draped with flags of the participating nations. On photographs from the time, buildings are barely visible, due to all the flags. Commentary made that year gives the impression that the Berlinale was seen as the “Olympics of Film” – an expression that was commonly used. The sports metaphor of “competition between nations” played a big role in the image of the festival. A country code was used during the film selection process and sometimes in the early years closer attention was paid to the origin of the movie than to the its actual content. 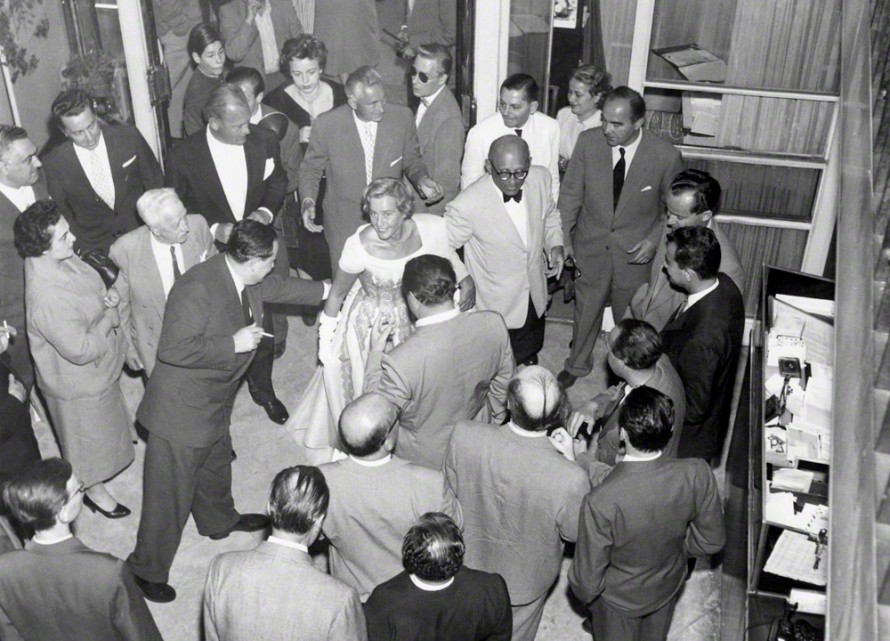 And so it was of considerable significance when the main prize of the Berlinale went to a German film for the first time: Robert Siodmak`s adaption of Hauptmann Die Ratten | The Rats starring the young Maria Schell is voted the best film by the audience. The almost documentary-style realism of the film, the undisguised appearance of war-ravaged Berlin and its inhabitants was even more striking than Otto Preminger’s Carmen Jones, which had garnered the most attention in the run-up to the festival. And once again an image flickered across Berlinale screens that would later become an icon of film history: the billowing skirt over Marilyn Monroe’s legs in Billy Wilder’s The Seven Year Itch.

A not insignificant political development: in the Berlinale guidelines, the Federal Republic of Germany appears for the first time as an official supporter of the festival.