Mónica has been living in Buenos Aires for 20 years working as a dancer when the news reaches her that her father is on his deathbed back in Spain. By the time she arrives, he’s already gone. Resisting the impulse to return as quickly as possible to her faraway life, she stays to help her mother sell the family home. When it becomes clear that she’s not merely bidding farewell to the place of her childhood, the past pushes its way into Mónica’s existence with unexpected force; old conflicts and regret about missed chances bubble up, and she realises she has limited time left with her mother. As still no one ever says much in this family, Mónica works through her inner turmoil primarily via her body, finding an outlet in dance.
In this moving debut filmed with non-professional actors, Meritxell Colell Aparicio manages to tell a story of fundamental emotions with little more than few simple gestures. Mónica, who likes to cocoon herself in layers of wool jumpers to stave off the cold, finds increasing warmth in spending time with her mother, sister, and niece, playing cards or going for walks together in the rugged, stormy landscape, whose sheer expanse opens out her inner confinement.

Born in Barcelona, Spain in 1983. She studied Audiovisual Communication at Pompeu Fabra University in Barcelona. Aside from being a filmmaker, she also works as an editor of feature films. Con el viento is her first feature film. 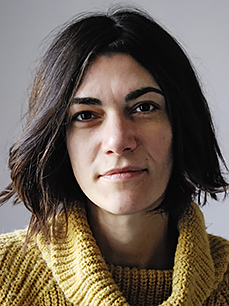