You’d never know this is your home away from home. The surveillance camera outside shows a drab reception area and an unremarkable street in Mexico City; inside, the lights flash, but the tables are empty. Yet preparations are soon underway and fixed categories cease to apply: stubble is removed, make-up applied and strands of hair are teased into place; the camera is trained not on the men themselves, but what they see in the mirror. There’s time for a lesson before the festivities get going, to practise walking, consider the letters of the alphabet, think about what sort of girl to be. Music plays, drinks are served and the last boundaries are suspended: those between man and woman, gay, straight and bi, past and present, reality and fiction. The people chatting at the tables or waiting before the darkroom are shot to resemble characters from a film, impossibly glamourous, which doesn’t mean their stories aren’t true. Whenever film stock replaces the digital images, it’s like a symbol for the memories Casa Roshell contains, the spectres of all those who came here and no longer felt alone. No matter how small the utopia, the world outside can still catch up.

Born in Chile in 1988. While studying film at the Universidad Mayor de Chile, she made several short films. Camila José Donoso runs the experimental film school Transfrontera in Arica, Chile, where she also teaches. 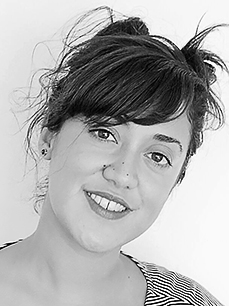