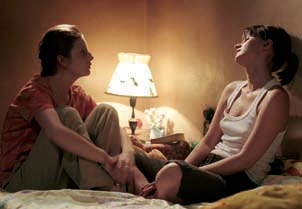 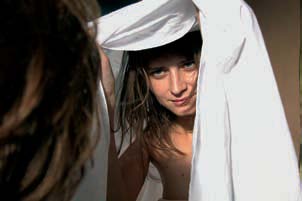 Alex is studying philology at Bucharest University. In order to spend more time with her girlfriend, Kiki, she decides to give up her room at the student’s hostel and move into the house where Kiki lives. The landlady is an irascible old dragon, but this doesn’t bother Alex. It means a lot to her that she can now get to know Kiki better. The girls’ friendship goes through a number of phases – from purely matey behaviour to more tender exchanges. Alex is the quieter and more practical of the two; she is very studious – after all she doesn’t want to disappoint her parents. Kiki is the more extravagant personality and subject to endless mood swings that she would rather hide if she could. Their relationship is not short of conflict but, in spite of this, they are soon on good terms with each other. Except when there’s someone else around. Kiki’s brother, Sandu, is so blatantly jealous of the girls’ growing friendship that one might think brother and sister were having an incestuous relationship.
A few months later, Alex and Kiki have indeed become a couple. Alex suggests to Kiki that they spend the summer at her parents’ house in the country. The world they discover there is quaintly old-fashioned and almost archaic, but, once they become accustomed to the environment, they begin to like the tranquillity it exudes. The girls enjoy their holidays and their love to the full. Theirs is a peaceful, idyllic summer. Until Kiki’s jealous brother Sandu appears on the scene, wanting to take Kiki back to town…