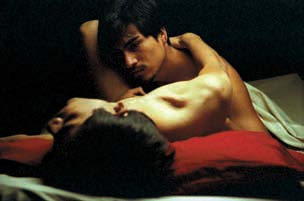 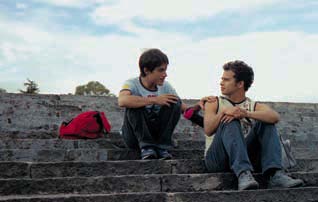 Gerardo and Jonas found love because they sought each other out. Theirs is an intense, passionate love. And then, one night at a disco, Bruno intervenes. A man of uncertain age, Bruno appears to be magnetically drawn towards this charismatic couple.
Jonas has an affair with him, but lacks the verve or the brazenness to take off with him. No sooner does Bruno appear than he disappears again. From this moment onwards, Gerardo sees Jonas as a harbinger of unavoidable death. Jonas, however, is still utterly enchanted by Bruno’s memory. Gerardo finds this unbearable; worse still, Jonas appears to show no interest in him physically. Although they have no intention of parting, their new way of life raises many problems and unexpected conflicts – but above all questions, so many questions.
Frustrated by the situation, Gerardo begins having affairs with other men. One of them is Sergio. Gerardo met him that night at the disco. Although it did not strike him at the time, Gerardo is now convinced that Sergio is the man he has been waiting to meet. But sex with Sergio primarily serves to banish all memory of Jonas.
Gerardo and Jonas stay together in spite of their relationships with other men. They love each other. And they will continue to love each other to the end of their days. Even if their parting is inevitable.