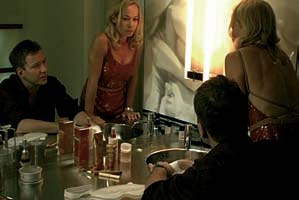 HP, an extremely successful investment banker, is hosting a barbeque at his luxurious villa, situated on Lake Zurich. He lives here with his wife Karin, their son Max and Birthe, the Danish au-pair girl. Nobody knows that HP has suffered large financial losses or that he is secretly advertising the sale of his villa on the internet.
Philip, HP’s boss, arrives with his pregnant wife Sue, who is expecting their second child. HP is hoping that the private, laid-back atmosphere will help him get the go-ahead from his boss for a deal that could save him.
The evening sets out to be a friendly affair. Before long, however, HP realises that his plan is not running smoothly: Gutzler, the slick intern that Philip brought to the party, knows too much. Moreover, he is coming on to HP’s wife, Karin. Philip proves quite unapproachable on account of the au-pair who is surreptitiously demanding all of his attention. She is threatening to blow the whistle on their affair.
Philip’s attempt to calm Birthe down by bribing her only makes matters worse: she refuses to accept the money. Insulted, she demands a horrendous sum of money. Even for Philip, this amount of money is too much and his pride won’t stand for it. Accustomed to his employees’ unwavering loyalty, he sends HP up to Birthe’s room to get her to drop her price.
When HP refuses to help Philip, the latter makes it absolutely clear to him that his job is on the line. After all, Gutzler is a very apt substitute. HP quickly realises this favour might be his last chance. HP pulls every trick he has out of his sleeve, but Birthe remains adamant. The evening turns into a fiasco.