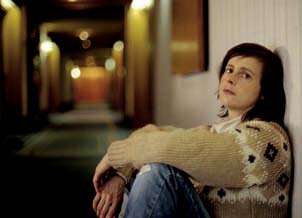 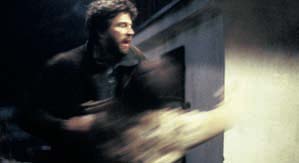 A new house in a new town could mean the beginning of a phase of domestic bliss for a small family. Nina, a doctor, has taken a few days off. Her husband Frieder is busy laying tiles, while their daughter Charlotte plays in her new room. But Nina is having her doubts; she stands about in the half-empty rooms, feeling thoroughly alienated. Suddenly, without saying a word, she decides to leave.
Paying a visit at first to her brother who is staying in their parents’ holiday home, Nina wanders aimlessly about the surreally mountainous landscape. She winds up with an ageing tennis star at a hotel for sports enthusiasts – an alien-looking concrete structure from another age. Nina’s attempt to break out of her existence isn’t some kind of existential revolt. It’s simply a brief encounter between two people who don’t seem to fit in. Never­the­less, step by step, a somnambulant Nina makes her way back to her own family.
The windows that arrive on Monday turn out to be the wrong ones – but it’s no tragedy. In fact, there’s nothing at all tragic about Nina and Frieder’s life together. Not even Frieder’s desperate attempt to seek refuge in an ex-girlfriend’s bed. The real tragedy is that, although Nina realises all of this, like a fish out of water, she is utterly incapable of doing anything about it.