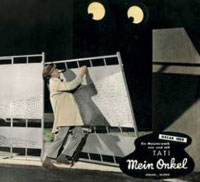 Monsieur Hulot lives in a rooftop apartment of an old tenement building full of nooks and cranies. His is a world in which time appears to have stood still. The weekly market just outside his door, the bistro opposite and the immediate locale are peopled by a universe of benevolent, if rather eccentric characters none of whom seem to be in any kind of a hurry. But this is the year 1958 and it can’t be said that everyone has as scant regard for blessings of modern living as they do here. Hulot’s nephew, Gérard, for example, whom Hulot sometimes collects from school, lives in a high-tech house, in which kitchen cupboards open automatically and contain, alongside appliances that are by no means unusual for the year 1958 such as refrigerator and mixer, a number of avant-garde devices that rumble and whirr quite happily even though one isn’t exactly sure what they’re used for. Hulot’s brother-in-law, a plastics manufacturer named Arpel, had this villa built especially for his family. The Arpels throw a soirée during which Hulot’s sister hopes to pair off her unmarried brother with a female neighbour. And tonight, Gérard’s favourite uncle is in top form. MON ONCLE is screening in this year’s retrospective.
“Like all moralists, Tati has a tendency to simplify, in that he divides up the world into good and evil – ‘evil’ being the world of technology, the plastic manufacturer’s villa with its limousine-romanticism and push-button gadgets, and ‘good’ being the world of the old-fashioned marketplace where cats purr, the concierge bickers, where an aperitif is more important than work and where, somewhere in the background, musette music can be heard. Anyone trying to penetrate the new world from this old one is hopelessly doomed to failure.” From: Ralph Eue, Gabriele Jatho (eds.): Schauplätze, Drehorte, Spielräume. Production Design + Film. Berlin 2005. The publication of this book coincides with this year’s Retrospective.