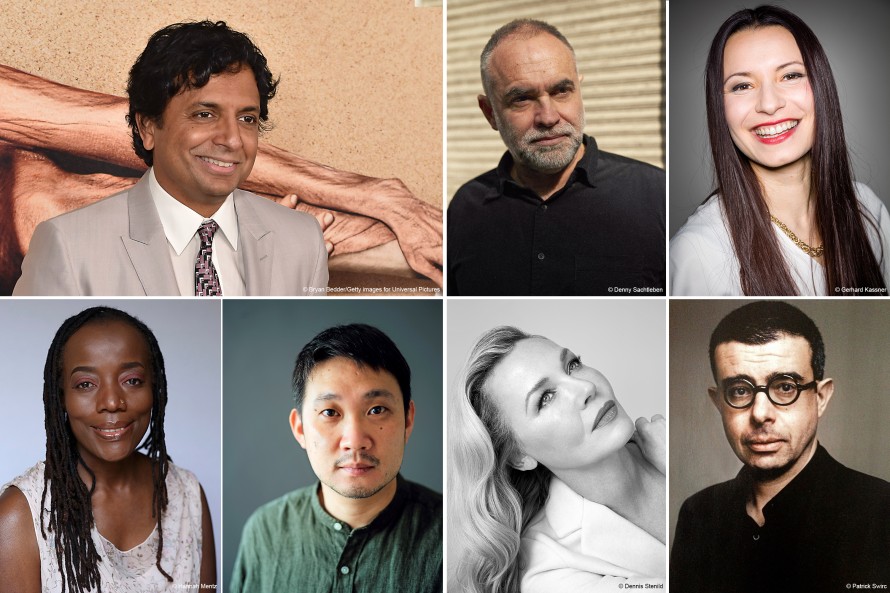 Once again a multitalented International Jury will decide who will take home the Golden and the Silver Bears at the Berlinale 2022. 18 films are competing for the awards in this year’s Competition. The winners will be announced at the Berlinale Palast on February 16.

Screenwriter, director and producer M. Night Shyamalan has been captivating audiences worldwide with his genre films over the past three decades. His impressive filmmaking includes 14 feature films as a cinema director. His breakthrough, the 1999 psychological thriller The Sixth Sense starring Bruce Willis, was the second highest grossing film of that year and received six Academy Award nominations. He then released a string of blockbusters with Unbreakable (2000), Signs (2002), and The Village (2004). The Visit (2015) was the most successful horror film of 2015. He could repeat this success with his next film Glass (2019). Shyamalan has also had an equally successful start in the TV sector in 2015 with the 10-episode event series Wayward Pines for FOX, based on the best-selling novels. Currently Shyamalan serves as showrunner for the award-winning series Servant for Apple TV+. He has also directed several episodes of the series. His latest cinema film Old, which is based on the graphic novel "Sandcastle" was released internationally in cinemas in summer 2021. He is currently working on his next cinema film, Knock at the Cabin, which will be released in February 2023.

Karim Aïnouz first studied architecture in Paris and Brasilia before doing a degree in film studies at New York University and gaining practical experience as an assistant director for Todd Haynes. His feature film debut Madame Satã premiered at Cannes in 2002, later O Céu de Suely (Love for Sale, 2006) and Viajo Porque Preciso, Volto Porque te Amo (I Travel Because I Have To, I Come Back Because I Love You, 2009) screened in Venice. Aïnouz is also a regular guest at the Berlinale: in 2014, with Praia do Futuro (Futuro Beach) was shown in Competition; at the same time, Cathedrals of Culture ran in Berlinale Special, where he was one of six directors. His two documentaries Zentralflughafen THF (2018), awarded the Amnesty International Prize, and Nardjes A. (2020) were both shown in Panorama. His feature film A Vida Invisível (Invisible Life) won the main prize in Un Certain Regard section at Cannes in 2019, and two years later his autobiographical work O Marinheiro das Montanhas (Mariner of the Mountains) also screened at the Croisette.

Anne Zohra Berrached, born in Erfurt in 1982 as the daughter of a German and an Algerian, first studied social pedagogy and worked as a theatre pedagogue in London before turning to filmmaking. After her first own short documentary film Der Pausenclown (2009), she studied at the Filmakademie Baden-Württemberg. Her first feature-length film Zwei Mütter (Two Mothers) was awarded the section prize in the Perspektive Deutsches Kino at the Berlinale in 2013, and three years later 24 Wochen (24 Weeks) ran for the Golden Bear in the Competition. The film was awarded the German Film Award in Silver and received the GUILDE Film Award. Berrached, who usually has professional actors act together with amateurs in her films and focuses on the greatest possible authenticity, presented her most recent film Die Welt wird eine andere sein (Copilot) in the section Panorama of the Berlinale in 2021. In addition to her cinema work, the filmmaker has directed three highly acclaimed Tatort episodes.

Zimbabwean filmmaker and writer Tsitsi Dangarembga studied at Cambridge and the University of Zimbabwe before coming to Berlin to study directing at the German Film and Television Academy. As a screenwriter or director, she has been involved in several of her home country's cinematic milestones, including Neria (1991), Flame (1996), Everyone's Child (1996) and I Want a Wedding Dress (2011). In 1992, she founded her own production company, Nyerai Films, and in 2003, the International Film Festival for Women in Harare, which also gave birth to the African Women Filmmakers' Development Hub. She is also one of the co-founders of the Institute of Creative Arts for Progress in Africa (ICAPA) Trust. Dangarembga's most recent novel “This Mournable Body”, was shortlisted for the Booker Prize in 2020, which belongs to a three-part series including “Nervous Conditions” (1988) and “The Book of Not” (2006). In 2021, she was awarded the “Friedenspreis des deutschen Buchhandels“ as well as the PEN Pinter Prize and the PEN International Award for Freedom of Expression.

Ryûsuke Hamaguchi's episodic film Gûzen to sôzô (Wheel of Fortune and Fantasy) premiered in the Competition at the Berlinale in 2021, where it won the Silver Bear Grand Jury Prize. In the same year, he also received the Best Screenplay Prize for an adaptation of Murakami’s Doiraibu mai kâ (Drive My Car), which premiered at the Cannes Film Festival. Hamaguchi’s graduation film Passion from the Tokyo University of the Arts, screened at the San Sebastián Film Festival in 2008. This was followed by the feature film The Depths and the documentary Tōhoku Trilogy (Nami no oto (Sound of the Waves), Nami no koe (Voices from the Waves), Storytellers), which he directed together with Ko Sakai between 2011 and 2013. His international breakthrough came in 2015 with Happî awâ (Happy Hour), which celebrated its world premiere in Locarno. Three years later, he was invited to the competition in Cannes with Netemo sametemo (Asako I & II). In addition to his directing work, he also wrote the screenplay for Kiyoshi Kurosawa's Supai no tsuma (Wife of a Spy), which won the Silver Lion for Best Director at Venice in 2020.

Connie Nielsen was born in Denmark where she started her career on stage alongside her mother in political Revue and Variety shows. She moved to France and Italy as a young woman to continue her studies and further her acting career internationally. Once in the US, she starred in Ridley Scott's Oscar winner Gladiator (2000), Mission to Mars (2000) by Brian de Palma and Basic (2003). She first appeared in a Danish production for Susanne Bier's Brothers (2004) for which she was nominated for the European Film Award, among others, and received Best Actress awards in San Sebastián and the Danish film prize The Bodil. Nielsen has also worked with directors such as Olivier Assayas (Demonlover, 2002) and Lars von Trier (Nymphomaniac: Vol.1, 2013) and appeared in blockbusters such as Wonder Woman (2017) by Patty Jenkins and Zack Snyder's Justice League (2021). Most recently, she was a lead actress and executive producer on the British series Close to Me (2021). Nielsen is also the founder of the organisations Human Needs Project and Road to Freedom Scholarships.