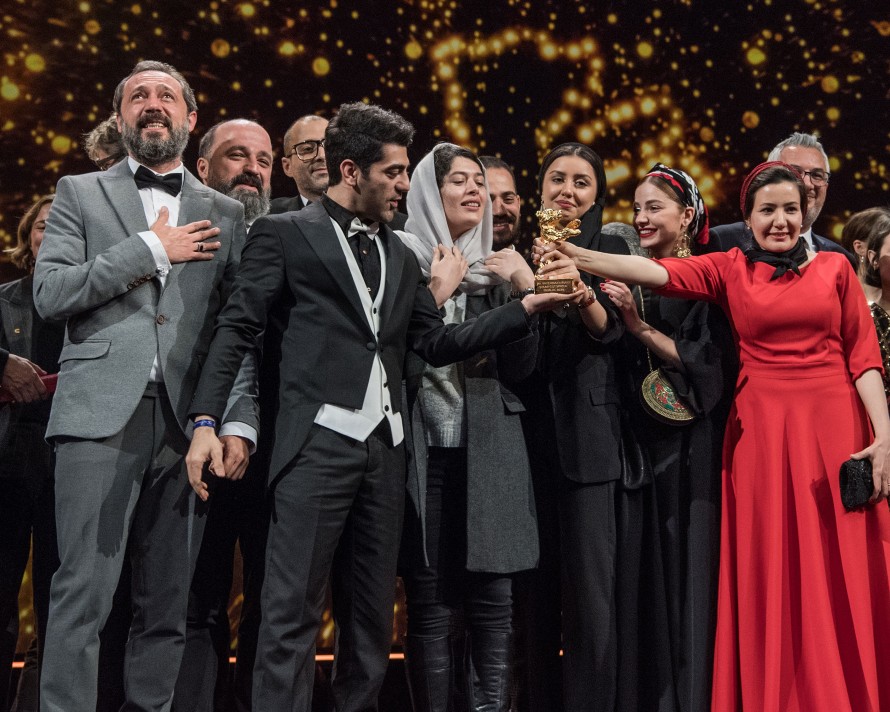 Golden Bear for Best Film 2020: Sheytan vojud nadarad (There Is No Evil) by Mohammad Rasoulof – the film team on stage.

The 70th Berlin International Film Festival ended successfully with the “Berlinale Publikumstag” on March 1. Following the Award Ceremony on Saturday evening, at which Sheytan vojud nadarad (There Is No Evil) by the Iranian director Mohammad Rasoulof received the Golden Bear, numerous fans flocked again to the cinemas on the “Berlinale Publikumstag” to watch selected festival films from all sections.

The interest shown with respect to the programme of the 70th Berlinale was again very impressive, both among the trade visitors and the public: Around 22,000 industry professionals from 133 countries came to the festival. The Berlinale has reaffirmed its reputation as a public festival with around 330,000 tickets having been sold.

“We thank all guests, the audience and our team for a great 70th anniversary and festival. Eleven days with full cinema halls, festive cinema premieres, exciting panels and enriching encounters are behind us. It was nice to feel so much enthusiasm and love for film at our first Berlinale. We are looking forward to the 71st Berlinale”, said the Berlinale Director duo Mariette Rissenbeek and Carlo Chatrian.

The various sections of the festival offered viewers a multifaceted film programme and numerous audience discussions with the film teams. The special programme “On Transmission”, on the occasion of the 70th anniversary was also enthusiastically received. Film enthusiasts from all over the world came together at all of the venues and engaged with the diversity of the 342 festival films with great interest.

The Berlinale's European Film Market (EFM) looks back on eight extremely successful market days at the Gropius Bau and the Marriott Hotel. The 11,423 market participants (previous year: 10,964) represent a new record. Moreover, the approximately 150 cancellations from China and other countries due to the Corona Virus did not result in a noticeable drop in the total number of visitors. With “Chile in Focus”, the EFM strengthened Chilean filmmakers in their creative work and gave them as well as their system-critical films great visibility, especially on the international level.

The Berlinale Co-Production Market organised 1,500 meetings for the selected feature film projects, “Co-Pro Series” projects and Company Matching initiatives. Many of them have already found their future co-production and financing partners here on location.

This year's World Cinema Fund Day focused on director’s talks as well as sustainable strategies for cinema and audiences. Two new funding activities were also introduced: The “Audience Design Award - by WCF Europe & TFL” - together with the TorinoFilmLab (TFL) - and the new funding programme WCF ACP, which was launched in cooperation with the ACP Secretariat (African, Caribbean and Pacific Group of States) and the European Commission.

Some 255 talents and thousands of Berliners discussed and explored alternative forms of “collectives” at Berlinale Talents. Guest collectives such as ruangrupa and filmmakers such as Cate Blanchett, Jia Zhang-Ke, Hildur Guðnadóttir and Helen Mirren expressed their respect for cinema as a meeting place, for fair cultural work and for hope in spite of political and social crises. Thereby, Wim Wenders particularly encouraged the talents themselves: “You are the grassroots of change.”

The 71st Berlin International Film Festival will take place from February 11 to 21, 2021.