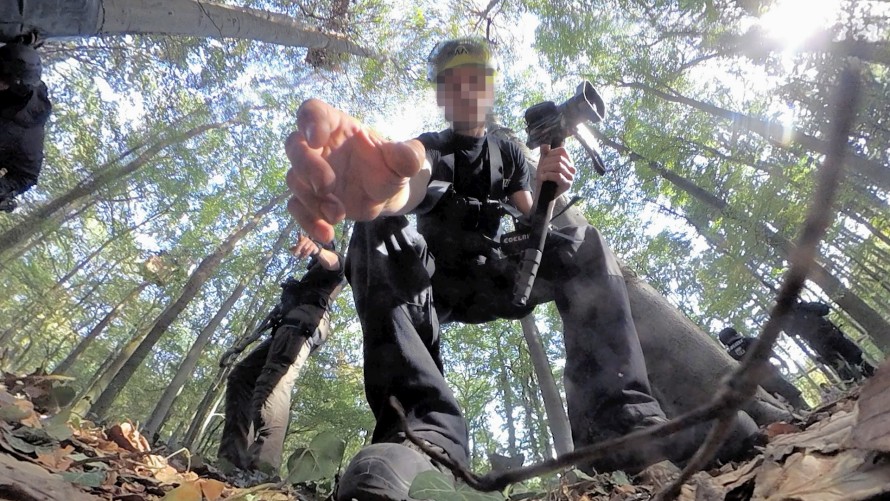 Crises everywhere: Complex social and political conflicts, global warming and the need for environmental conservation, plus all the usual tensions and questions regarding commitment, closeness and distance. In the midst of it all are young film creatives from Germany unafraid to tackle any subject. Their versatile and passionate cinematic takes create hope. Because the first important step is seeing and identifying the problem.

The opening film Sieben Winter in Teheran (Seven Winters in Tehran) by Steffi Niederzoll documents a justice system scandal in Iran: A young student was hanged after seven years in prison. She was convicted for murder - but she had stabbed a man who was trying to rape her. Despite international protests and efforts, the Iranian justice system applied the principle of “blood vengeance”: If Reyhaneh Jabbari had publicly declared that there was no attempt to rape her, the verdict would not have been carried out. Reyhaneh stuck to the truth. And paid for it with her life.

The story of this case, told with the help of source material, bolsters the increasingly louder protests against the mullah regime, which makes life difficult or even impossible for women in particular.

The fiction films Elaha by Milena Aboyan, Ararat by Engin Kundag, and El secuestro de la novia (The Kidnapping of the Bride) by Sophia Mocorrea also focus on female perspectives and restrictive gender constructs: German-Kurdish protagonist Elaha thinks she has to restore her hymen prior to her wedding. A family drama characterised by sexual aggression and speechlessness plays out at the foot of the dormant volcano Ararat. And the kidnapped, designated bride of an Argentine-Brandenburgian relationship stumbles through confusing traditions.

In Fabian Stumm’s full-length film debut Knochen und Namen (Bones and Names), staged with subtle irony, the partnership between an actor and an author turns out to be more vulnerable to crises than expected. Siblings are the central characters of Langer Langer Kuss (Long Long Kiss), Lukas Röder’s work regarding mental health. Tanja Egen’s lovingly and carefully observed film Geranien (On Mothers and Daughters) poses the question whether daughters stay daughters once they become mothers themselves. And whether you can get the small town out of the girl when you get the girl out of the small town.

What’s personal is always political - and in Ash Wednesday, a short musical by directors João Pedro Prado and Bárbara Santos on racism and police brutality in a Brazilian favela, it’s highly musical as well.

Concern for the future comes naturally to up-and-coming German filmmakers. The dystopian documentary film Nomades du nucléaire (Nuclear Nomads) by Kilian Armando Friedrich and Tizian Stromp Zargari looks at precarious employment systems and questions on clean energy in the dirtiest environment imaginable - nuclear power plants, where the film’s protagonists do maintenance work. Situated at a dizzying height, the documentary film Vergiss Meyn Nicht (Lonely Oaks) is based on the original material of a film student who fell to his death during a police evacuation of a treehouse in Hambacher Forst. Directors Fabiana Fragale, Kilian Kuhlendahl and Jens Mühlhoff contemplatively pose the question of how far activism should go.

Besides the Heiner Carow Prize, all selected fiction and documentary films will compete for the Compass-Perspektive-Award, endowed with 5,000 Euros. The jurors are actor Dela Dabulamanzi, editor Anne Fabini, and director Jöns Jönsson.

In the new series Perspektive Match, experienced filmmakers will participate in an artistic exchange with up-and-coming talents from the same film crafts. On four afternoons at HAU and in cooperation with Berlinale Talents and the German Film Academy, following Perspektive talents will be paired: Bayan Layla (actor, Elaha) with actor Jenny Schily, Daria Somesan (sound, Geranien) with sound designer Frank Kruse, Evelyn Rack (editing, Ararat) with editor Hansjörg Weißbrich and Ole Wiedekamm (score, Ash Wednesday) with composer Ali N. Askin at a panel discussion. A film by the fellow craftspeople from the German Film Academy will be shown beforehand.