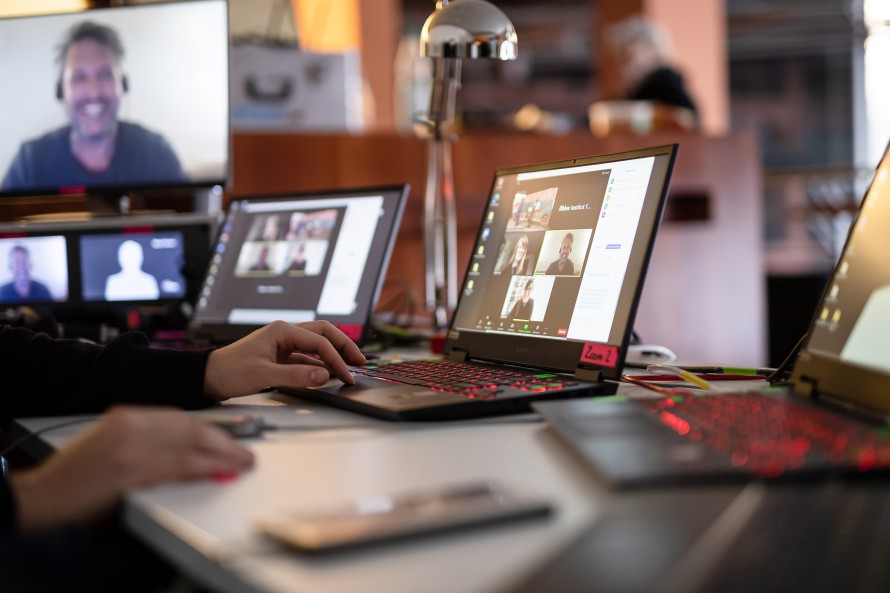 The "EFM Industry Sessions" under the motto SHAPING CHANGE invite you to join a programme with transversal market-wide themes.

This year, the European Film Market’s conference programme, the “EFM Industry Sessions”, is entitled SHAPING CHANGE. Over six days (February 10-15, 2022), the challenges facing the film and media industry in times of digital transformation will be addressed and impulses given to help shape our shared future.

The "EFM Industry Sessions" will discuss the three core themes - future, diversity & inclusion and sustainable development - in different formats that include a three-part think tank series. There will be four programme sections, "Producers", "Distribution", "Documentary" and "Series", each of which represents a major group of market participants. Networking in the form of round tables and organised meetings is also planned as a central component. On February 15, the programme will finish with the presentation of its key findings at the closing event. This year, the EFM is pursuing a sustainable approach in its programming, focusing on collaborations that create synergies and (necessary) thematic immersion through targeted networking with partners.

The opening will set a course for the programme’s overarching title: (co-)shaping change in the film and media industry. The event focuses on changes, especially in the fields of storytelling and content creation, resulting from new technologies, business models and distribution channels.

Highlighted Formats in the Conference Programme

In the "Producers" section, a two-part talk will discuss ways in which independent producers in particular can develop functioning business models in 2022, in a market that is dominated by streaming services and the current battle over IP rights. The focus will also be on the question of how smaller companies in the audio-visual industry can operate sustainable and adapt to transformations in the value chain.

The talk “Darwin's Nightmare” in the programme section “Distribution” examines the drastic upheavals that the pandemic in particular, but other factors as well, have triggered in film distribution. “Building up Publicity” addresses the central role which tailor-made promotional strategies play in international film sales and distribution. Another format will focus on the growing VoD landscape in Africa and its impact on the industry.

In turn, “Series” looks at current trends in the series business, from the strategies of international streamers and their already existing or potential investment commitments in local European markets to the question of whether and how talented individuals with disabilities are represented and included in the series industry―in front of, but also behind the cameras.

Four talk formats within the spectrum of “Inclusion” highlight the transformative power of institutions. Institutions have the systemic means and opportunities to bring about sustainable structural change and empower marginalised creatives using data and technology-driven strategies, as well as raising awareness and ultimately changing the attitudes of decision-makers from the Global North. Simultaneous subtitling of the “EFM Industry Sessions’” live streams makes accessibility a concrete reality. EFM Diversity & Inclusion is co-funded by the European Union’s Creative Europe - MEDIA programme.

The “Future” theme is reflected in many of the “EFM Industry Sessions” including the EFM Startups initiative, where twelve hand-picked, innovative entrepreneurs present their ideas, services and tools for the film and media industry with groundbreaking solutions for development, production and distribution. The talk “How the Future of Animation Changes (with) Tech” explores how the collaborative power of animation can deliver immersive experiences and storytelling, and looks at the role technology plays in driving the film and animation industry. Artificial intelligence, blockchain, streaming and virtual production―just buzzwords at first―are now an integral part of real-time production and the meta-world. The talk “What Tech Trends Mean for Tomorrow's Productions” also enquires into their significance for media productions.

“Sustainable development” will provide the focus of the workshop “Greening the Industry: Imperatives from Production to Distribution”. It deals with green production, whether CO2 avoidance or necessary systemic changes, and with green film distribution in the field of streamers, cinemas and broadcasters. Social sustainability, such as the aspect of mental health in the work context, remains on the agenda of the EFM conference programme for the third year.

The three-part Think Tank series in particular will be encouraging people to help shape change. Concrete approaches for future-oriented changes will be developed in working groups including international experts. The think tank “Shaping the Future of the Film Ecosystem” will discuss the strategic direction of production companies, tech tools, participation and mental health. “Shaping Production: Equity, IP and Alliances vs. Independence” addresses the challenges of financing, intellectual property, and the question of whether producers should enter into creative alliances or remain independent. “Shaping Distribution: EcoStability, Blockchain & Hybrid Audiences” is devoted to future scenarios of film distribution in the context of blockchain technology, festival distribution, and protected professional entry into the industry. Additionally, the core results of the three think tanks will be presented at the closing event.

At the beginning of each day, the ten-minute "EFM Morning Brief" again provides a compact update on current market events and the upcoming programme highlights of the day. The EFM podcast "Industry Insights", in cooperation with the Goethe-Institut, offers in-depth discussions on current and future industry issues.

The “EFM Industry Sessions” are accessible with an Online Market Badge; they are streamed live, and most of them can also be viewed later on demand. The comprehensive programme is available at www.efm-berlinale.de.