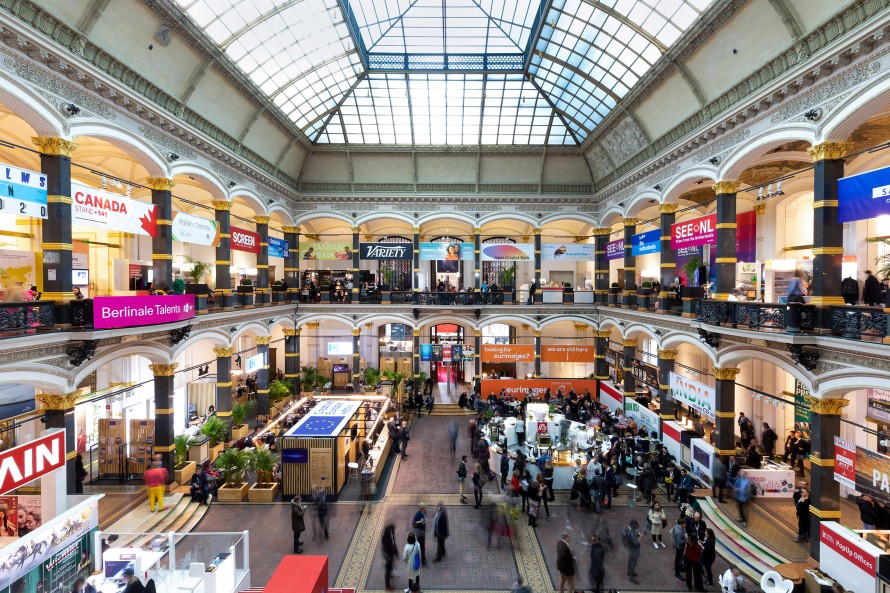 The EFM is expecting buzzing business not only at its main location, the impressive Gropius Bau as the industry returns to Berlin.

The European Film Market (EFM) of the 72nd Berlin International Film Festival will take place from February 10 to 17, 2022 under the motto “It all (re)starts here”. The exhibition areas in the Gropius Bau and in the Marriott Hotel are already largely booked out. Additionally, the film and media industry is showing great interest in market accreditations. Traditionally at the beginning of the year, the central platform for trading in rights to films and audiovisual content gives an outlook on the production, evaluation and trading activities in the coming months, and makes Berlin the meeting place for producers, distributors, and sales agents from all around the world.

The “EFM Industry Sessions”, the five-day conference programme accompanying the market, are designed to act as a driving force for innovation and change in the industry. Under the title SHAPING CHANGE, they will discuss the challenges facing the industry in times of digital transformation and call on the industry to take on an active part in shaping the future together.

“The signs continuously point to change. The past exceptional months have accelerated this development rapidly and have demonstrated the need for change more than ever before,” says EFM Director Dennis Ruh. “With the ‘EFM Industry Sessions’, we invite you to not only react to the transformation that is taking place, but also to engage in shaping it - everyone individually and collectively as an industry. The conference programme will provide targeted impulses, suggestions and the motivation to act. It is intended to fortify the exchange and networking between the players, provide a breeding ground for new ideas and promote a lively discussion of the upheaval in the various areas of the industry.”

The “EFM Industry Sessions” will kick off on Friday, February 11. In a total of 25 slots in the four programme strands “Producers”, “Distribution”, “Documentary” and “Series”, each of which is backed by large groups of participants of the EFM, the three core themes of the “EFM Industry Sessions” - Future, Diversity & Inclusion and Sustainable Development - are discussed in different formats. The primary objective of the “EFM Industry Sessions” is not only to take up these priority topics, but also to call for action, for example in the area of Green Film Production or with the significantly expanded “Toolbox Programme” which, in addition to documentary filmmakers, now also includes producers of feature-length films from marginalised groups and the Global South. Furthermore, the large-scale Market Badge Inclusion Initiative proactively implements inclusion. Additionally, networking in the form of round tables and matchmaking is an important part of the “EFM Industry Sessions”. On Tuesday, February 15, the key findings from the five conference days will be presented in the closing event.

The “EFM Industry Sessions” will take place from February 11 to 15, 2022 at the Berliner Freiheit. The conference programme will be presented in hybrid form as a physical event on site and as a live stream. The recordings will be available as VoD afterwards. For the market participant groups represented through the four programme strands - producers, distribution, documentary films and series - separate working and meeting places as well as a common networking area will be established.

Another component of the “EFM Industry Sessions”, the “Berlinale Series Market” will take place as a market-within-the-market from February 14 to 16 at the Zoo Palast. The top-class conference programme highlights the topic of high-end series, framed by international showcases, regular market screenings as well as a curated selection of commercially promising series projects under the label “Berlinale Series Market Selects”. The “Berlinale Series Market” takes place in main partnership with the Film- und Medienstiftung NRW and is funded by the Medienboard Berlin-Brandenburg.

The numerous market screenings by the EFM exhibitors take place primarily in cinemas on Potsdamer Platz. For the first time, the Museum of Musical Instruments will also be a screening location. A new exclusive offer for Market Badge holders shows a selection of films from the current festival programme in the Cinestar Cubix at Alexanderplatz in the form of Industry Screenings.

Furthermore, online market screenings will once again be displayed in the form of the established screening schedule. All market participants determine their respective time zone. For the first time, selected market screenings will be available in the form of a VoD offer until March 8, 2022. The accessibility of films in the cinema, as momentum screening online during the market and / or as VoD for viewing, depends on the preferences of the rights holders, so that the complete portfolio will not be available in all formats.

In partnership with institutions and associations worldwide, the EFM is presenting a selection of documentaries in the rough-cut stage for the first time. Similar to the showcases at the “Berlinale Series Market”, the “Rough-Cut Presentations” provide a platform for documentary filmmakers to present, pitch and discuss excerpts from their films in a cinema on Potsdamer Platz for buyers, festival programmers and sales agents.

Italy is “Country in Focus”

Italy is the “Country in Focus” at the European Film Market this year. The appearance of the country in the market will focus on the vital and diverse filmmaking of Italy and offer numerous opportunities to network with Italian producers, distributors, investors and creative people. Italy takes centre stage as the second European country of the programme, following the previous focus countries Norway, Mexico, Canada and Chile since the introduction of the programme. “Italia in Focus” is supported by the Italian Ministero per i beni e le attività culturali e per il turismo (MiBACT) and the producer association ANICA.