Dec 16, 2021
Homage and Honorary Golden Bear for Isabelle Huppert at the 2022 Berlinale

The Homage section of the 72nd Berlin International Film Festival will be dedicated to French film and stage actor Isabelle Huppert, who will be awarded an Honorary Golden Bear for lifetime achievement. In conjunction with the Award Ceremony on February 15, 2022 at the Berlinale Palast, the festival will screen as a Berlinale Special Gala À propos de Joan (About Joan, dir: Laurent Larivière). Huppert is one of the most versatile actors in the world, and has played an impressive range of characters in almost 150 cinema and television productions.

Isabelle Huppert has been closely linked with the film festival for many years and starred in seven Competition films to date. She was first a guest in Berlin with La vengeance d’une femme (A Woman’s Revenge, dir: Jacques Doillon). Director François Ozon cast her in his dark musical comedy 8 Femmes (8 Women) as an unprepossessing woman who emerges in the end as a confident beauty. The ensemble cast was awarded a Silver Bear for outstanding artistic accomplishment. In L’Avenir (Things to Come), she also plays a woman re-discovering her freedom as a philosophy teacher in a failing marriage. Director Mia Hansen-Løve won the Silver Bear as Best Director for the film. 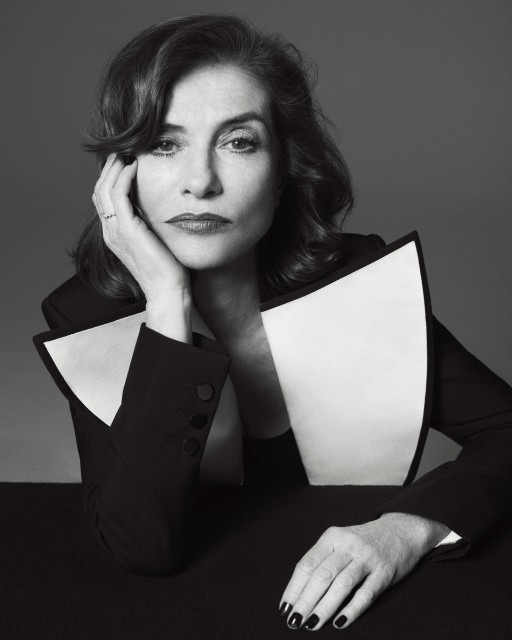 “We are proud to welcome Isabelle Huppert back to the festival,” say Berlinale directors Mariette Rissenbeek and Carlo Chatrian, “the Honorary Golden Bear may seem like a natural progression in a career without equal, since Isabelle Huppert is one of the few artists recognised with acting awards at all major film festivals. But Isabelle Huppert is more than a celebrated actor — she is an uncompromising artist who doesn’t hesitate to take risks and flout mainstream trends. Awarding her our most prestigious prize is to accentuate cinema as an art form, independent and unconditional. We often see actors as tools in the hands of filmmakers, but Isabelle Huppert is a clear example that the dynamic can be a true exchange. Actors can be the true engine of creating not only emotions, but also concepts of cinema.”

Isabelle Huppert began studying acting at the age of 14, and later attended the Conservatoire nationale supérieur d'art dramatique in Paris.

She began her career on stage and made her screen debut with Faustine et le bel été (Faustine and the Beautiful Summer, dir: Nina Companeez). Huppert’s first appearance in an international production was in the film Rosebud (dir: Otto Preminger). Two years later, her starring performance as the shy young woman Béatrice in Claude Goretta’s La Dentellière (The Lacemaker) won her the BAFTA as Most Promising Newcomer.

Huppert early on came to the attention of a host of top filmmakers, such as Jean-Luc Godard and Bertrand Tavernier. Her first turn for Godard was as the star of his Sauve qui peut (la vie) (Every Man for Himself). Other world-renowned directors soon seized on Huppert’s diverse acting talents, including Olivier Assayas, Catherine Breillat, Patrice Chéreau, Claire Denis, Andrzej Wajda, and Joachim Trier, as well as American filmmakers such as Curtis Hanson, Hal Hartley, Ira Sachs, and David O. Russell. Italian filmmakers Paolo and Vittorio Taviani gave her the lead in their film Le affinità elettive (Elective Affinities) and she was part of the ensemble in Marco Bellocchio’s Bella Addormentata (Dormant Beauty).

Acclaimed French director Claude Chabrol cast Isabelle Huppert in a total of seven films, with each character as mutable and complex as the next, beginning with the title role in Violette Nozière. That garnered her her first Palme D’Or for Best Actress at the Cannes film festival. Huppert and Sandrine Bonnaire played a pair of homicidal friends in the director’s La Cérémonie, a role that won her a César. Huppert’s final collaboration with Chabrol was her complex portrayal of a powerful judge in L’ivresse du pouvoir (Comedy of Power), which premiered in Competition at the Berlinale.

The actor’s film career has also been shaped by her work with Austrian director Michael Haneke, with whom she has made four movies. Her outstanding lead performance in his controversial 2001 drama La Pianiste (The Piano Teacher) brought her accolades as Best Actress in Cannes and at the European Film Awards, among others. Beginning with her appearance in Brillante Mendoza’s Captive, shown in Competition in Berlin, Huppert has increasingly worked with Asian directors. That same year, she was in Hong Sang-soo’s Da-reun na-ra-e-seo (In Another Country), playing three different women who all have the same name.

Huppert has also made successful films with other German-language directors and actors. She appeared alongside Hanna Schygulla in Storia di Piera (The Story of Piera) directed by Marco Ferreri. And she took on the lead as the nameless writer who increasingly loses touch with reality in the film adaptation of Ingeborg Bachmann’s Malina (dir: Werner Schroeter), winning the German Film Prize. She was top-billed in Swiss director Ursula Meier’s Home.

Isabelle Huppert has been nominated for the French film prize César more than any other actress in France, and has twice won one. Her virtuoso acting style has also brought her two Palmes D’Or at Cannes. She has appeared in more than 20 films shown in competition there — yet another record. She won a Golden Globe as Best Actress for her work in the thriller Elle (dir: Paul Verhoeven). That role as a successful businesswoman who takes revenge on her rapist also resulted in her first Academy Award nomination.

In addition to her successful onscreen career, Isabelle Huppert also continues working on stage and has been awarded the Europe Theater Prize, among others. After premiering the French version of Orlando, she took to the stage under Robert Wilson’s direction once again as the glacial marchioness Merteuil in Heiner Müller’s Quartett. She was equally brilliant in Sarah Kane’s play 4.48 Psychosis staged by Claude Régy. A guest performance of that play in Berlin marked the first time that Huppert appeared on a German stage, entrancing audiences with her intense portrayal.

The French-German-Irish co-production À propos de Joan (About Joan) directed by Laurent Larivière, which stars Huppert alongside Lars Eidinger, will be released in Germany in 2022.