© 3 Tabela Films / Zeca Miranda
‘I don’t know what it was, Dad. I think it was the light that came through the window and lit up her face. Mom! Why do you look so beautiful?’

In an exhilarating, immersive flood of images, this mysterious drama portrays the coming of age of 13-year-old Maria, who lives in a remote rural home alone with her mother. When a young man moves into the neighbourhood with his goat herd, her life is suddenly turned upside down. As secret wishes and fears stir within Maria, she anxiously realizes that her mother seems to have gained a fresh lease on life. Maria confides only in her father, whom she visits in a somewhat surreal sanatorium. Why is he there? And why does he say that God is evil? Maria decides to take a drastic step. With its captivating visual opulence and the fairytale-like poetry of its narrative style, the film creates a space which inspires imagination and self-reflection.
by Eduardo Nunes
with Bárbara Luz, Patrícia Pillar, Zé Carlos Machado, Lee Taylor Brazil 2017 Portuguese 123’ Colour 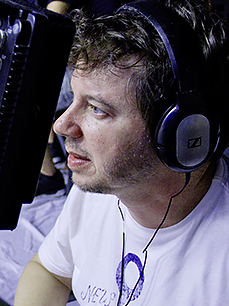 Born in Niterói, Brazil in 1969, he studied at the film school of the Universidade Federal Fluminense in Rio de Janeiro and made his first short film Sopro (Breath) in 1994. He went on to direct four more shorts which together won over 30 awards at international festivals. In 2012 he was invited to be an artist in residence in London where he made a film installation inspired by the Hungarian writer Sándor Márai. His feature film debut Sudoeste premiered at the International Film Festival Rotterdam, screened in 27 countries and won a total of 23 awards.