© Fabian Gamper
When Jimmy and Hannah finally find a buyer for their decrepit holiday home on a Greek volcanic island, the former couple return for the first time to this place where they separated exactly two years ago. They are accompanied by their seven-year-old daughter, Luca, who is adored by both parents – something the little girl is not averse to using to her advantage. No sooner do they arrive on the idyllic island in the Aegean than the old tensions and conflicts begin to resurface. Hannah in particular is jealous of the intimate relationship between father and daughter – a relationship from which she is almost aggressively excluded. But then something happens that nobody expected: Hannah and Jimmy grow closer to one another again – and this once more throws Luca’s world into confusion. Although her parents’ separation at first felt like being expelled from paradise she has made herself at home in the second best of all worlds. But if the adults have now decided to change everything around again – or even go back to the way things were – they should at least be aware that their daughter has enough sand in her pockets to really jam up the family works!
by Mascha Schilinski
with Helena Zengel, Karsten Antonio Mielke, Artemis Chalkidou Germany 2017 German 103’ Colour 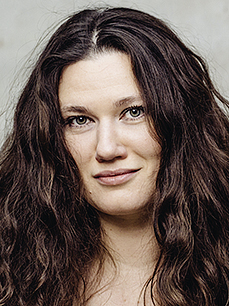 Born in Berlin, Germany in 1984, after various film internships she travelled throughout Europe, wrote short stories and performed as a magician and fire-eater in a small travelling circus in Italy. In 2008 she completed a writing masterclass at the Filmschule Hamburg and then worked as a freelance writer in Berlin. Since 2012 she has been studying film directing at the Filmakademie Baden-Wuerttemberg. Die Tochter (Dark Blue Girl) is her first feature-length film.