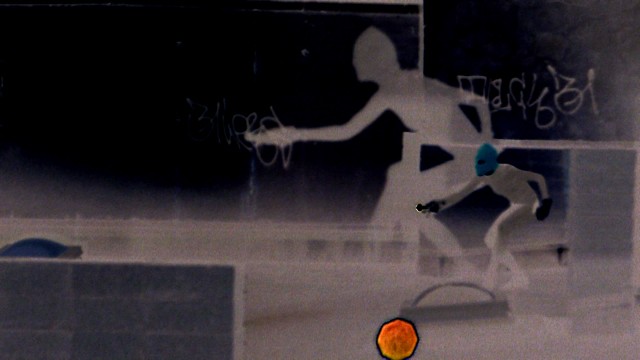 © Eva C. Heldmann
The film interviews five people who cannot pay their electricity bills. They live below the poverty line without light and heat, in or near large cities. Berlin-based artist Laurence Grave acts a composite role, representing aspects of the other people. She sees, hears, and touches in her forsaken apartment, and feels limited and excluded. At the same time she is extra-sensitive to the passage of light, day and night, through her windows.
A long indoor twilight persists between the bright sunlight and the nightcar lights that both shine onto her walls making ‘cinema’. The sounds that creep into the apartment are just alien to her.
The people interviewed read their responses for the camera – a technique meant to relax the original interview and give the people some interpretative distance from themselves. They speak of how they lost work, then electricity, then hope, and finally found clever solutions to their precarious situations.
In the end the actress rises from her dark world to dizzy heights, flashing with her own electricity, remaking the rules of the game.
Elektra triumphs!
by Eva C. Heldmann Germany 2015 81’