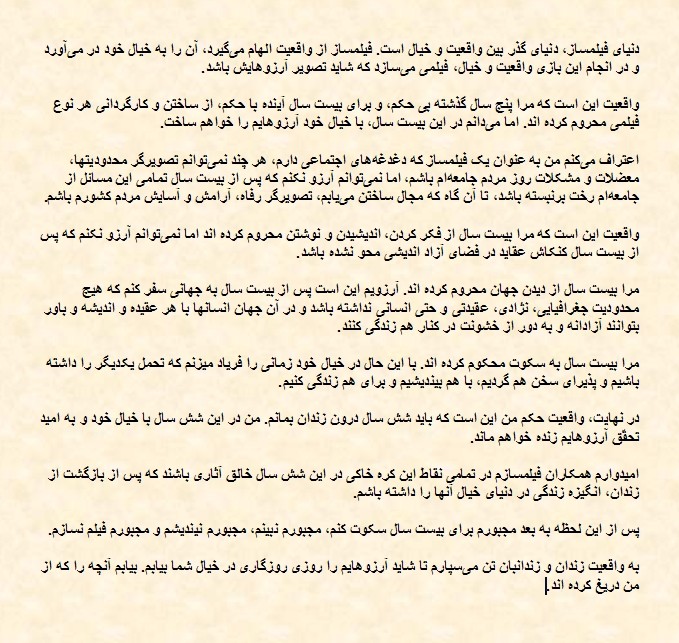 The world of a filmmaker is marked by the interplay between reality and dreams. The filmmaker uses reality as his inspiration, paints it with the color of his imagination, and creates a film that is a projection of his hopes and dreams.

The reality is I have been kept from making films for the past five years and am now officially sentenced to be deprived of this right for another twenty years. But I know I will keep on turning my dreams into films in my imagination. I admit as a socially conscious filmmaker that I won’t be able to portray the daily problems and concerns of my people, but I won’t deny myself dreaming that after twenty years all the problems will be gone and I’ll be making films about the peace and prosperity in my country when I get a chance to do so again.

The reality is they have deprived me of thinking and writing for twenty years, but they can not keep me from dreaming that in twenty years inquisition and intimidation will be replaced by freedom and free thinking.

They have deprived me of seeing the world for twenty years. I hope that when I am free, I will be able to travel in a world without any geographic, ethnic, and ideological barriers, where people live together freely and peacefully regardless of their beliefs and convictions.

They have condemned me to twenty years of silence. Yet in my dreams, I scream for a time when we can tolerate each other, respect each other’s opinions, and live for each other.

Ultimately, the reality of my verdict is that I must spend six years in jail. I’ll live for the next six years hoping that my dreams will become reality. I wish my fellow filmmakers in every corner of the world would create such great films that by the time I leave the prison I will be inspired to continue to live in the world they have dreamed of in their films.

I submit to the reality of the captivity and the captors. I will look for the manifestation of my dreams in your films, hoping to find in them what I have been deprived of.