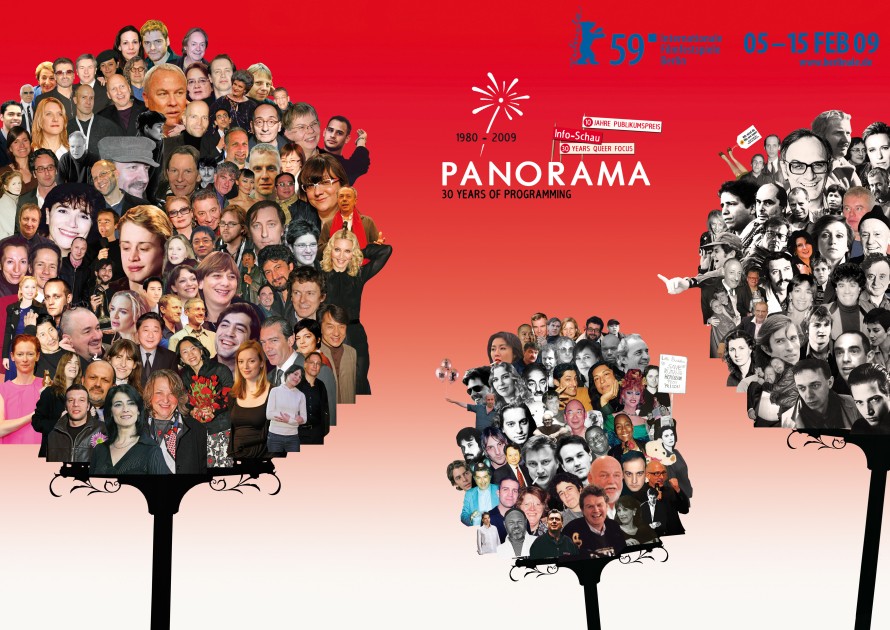 From some 70,000 archive images, graphic artist Jörg Eschenburg has selected 172 photos of directors, actors and actresses, and assembled them into a historical collage for a special “30 years of programming” poster which you can see here. In order to match the many faces to the corresponding names, you will find a poster with a legend as a download here: Poster with legend (2.8 MB)

To celebrate the 30th anniversary of this section, first presented as the “Info-Schau” in 1980 by its former director Manfred Salzgeber (and renamed Panorama in 1986), a number of filmmakers from the early years showed their latest films: in 1985, for instance, the “Info-Schau” screened Gus Van Sant’s directorial debut, Mala Noche, as well as the documentary The Times of Harvey Milk by Robert Epstein, who won an Oscar for it. Now, in 2009, Gus Van Sant presented Milk, his new film about Harvey Milk, the first gay city commissioner in San Francisco in the late 1970s, who died by assassination; Robert Epstein’s documentary on the same topic was re-screened on this occasion.

In addition to her most recent film in the Main Programme, Catherine Breillat’s film Tapage nocturne, which was first presented in 1980, was shown again in 2009. Joe Dallesandro, who played one of the protagonists in her film, was this year’s Special TEDDY Award-winner. He also came to Berlin for the presentation of Little Joe, Nicole Haeusser’s documentary portrait of him. Breillat's new film Barbe bleue was presented in this year's Panorama Main Programme.

A John Hurt triptych completed the films being presented for this 30th anniversary: in the official programme, Panorama showed British director Richard Laxton’s latest film, An Englishman In New York, in which John Hurt plays Quentin Crisp in his later years in New York, as was celebrated in Sting’s 1987 hit of the same name. The Presentation also included Jonathan Nossiter’s first film, Resident Alien (with Quentin Crisp, John Hurt, Holly Woodlawn and Sting) that premiered in Panorama in 1990, as well as Jack Gold’s legendary The Naked Civil Servant (1975), in which John Hurt plays the young Quentin Crisp in England.