Taste is Worth Fighting for 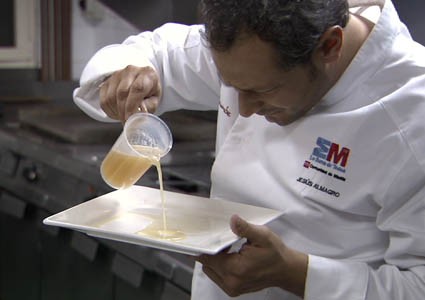 The Chicken, The Fish And The King Crab

Filmmaking and cooking, cinema and food - they have much in common. At the Berlinale Talent Campus 2006, the 'Hunger, Food, and Taste' Symposium already explored this assumption and uncovered many parallels. The symposium was a cooperation with the Slow Food organisation, which is now continuing. “Food is mankind’s oldest medium and film is the newest,” says Thomas Struck, organiser of the film and event series “Culinary Cinema: Eat, Drink, See Movies”. We talked to him about good taste, the significance of fire and the conviction that a bite can change the world.

Why does the Berlinale want to bring together cinema and culinary culture?

Food is mankind’s oldest medium and film is the newest. They have much in common: Both are associated to joy, pleasure, entertainment – and responsibility. Both are consumed over a limited period of time. The production processes also bear similarities: Once you’ve gathered the ingredients, a transformation from raw material into a dish or a film occurs. With film, this happens with the camera, with food it happens on the cooker. And look, the word ‘focus’ has its origins in the Latin word for stove.

Both cooking and filmmaking are about an ongoing transformation from one form of matter into another, from fantasy into reality and vice versa. Reality is transformed into a dream. If the connection to food is lost, a significant part of a culture disappears, as human civilisation has its roots in the taming of fire and cooking.

Eat, Drink, See Movies - Celebrating Culinary Cinema shows films, which have been inspired by food. After the screenings, five top Berlin chefs, Bobby Bräuer, Michael Hoffmann, Thomas Kammeier, Kolja Kleeberg and Tim Raue, will present dinners inspired by the films. Every night we will be showing two films in the Martin-Gropius-Bau, a total of 7 premieres, an evening of short films and two classics, which haven’t been shown on the big screen for years.

How do you imagine a perfect evening at the Culinary Cinema?

Before the first film starts at 7.30, the chef of the evening is introduced. After the film, members of the audience enter the “Gropius Mirror”, the new temporary restaurant on the south side of the Martin-Gropius-Bau. There, a meal inspired by the evening’s film will be served. This will be followed by a discussion with the chef, filmmakers and other guests. The talks will be moderated by Alfred Biolek. We believe that the “Gropius Mirror” is extremely attractive in culinary terms and will become a popular meeting place during the Berlinale. If our guests feel like coming back for more, then our evening can be called a success.

Since Dieter Kosslick took over as Berlinale Director, the festival has shown a growing interest in smaller, more independent productions. That’s exactly what Slow Food is all about. The motto “Think globally, act locally!” fits perfectly to good cooking and good filmmaking. In many cases, a filmmaker’s subjects originate from his or her immediate experience. In other words, his or her work has local relevance.

Making films and preparing food are both rooted in the knowledge of a certain milieu. But in both fields, authenticity and individuality are seriously under threat. Industrial production methods and standardised forms of consumption result in a loss of diversity in both areas. In the case of food, the progressive loss of biodiversity is a threat to life. There are now genetically modified variations of many crops such as maize, soy, rice and cotton. To sacrifice vitally important diversity for the sake of profit is a new form of war and colonialism. It’s not only locally that people can stand up against this trend. Everyone, as a consumer, has the power to make a change. 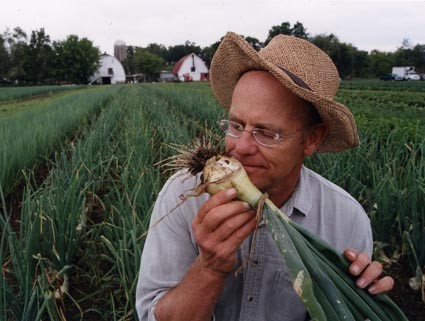 The Real Dirt On Farmer John

"Delicious Revolution": A bite can change the world

One could call the ecological and social realities you describe the flipside of enjoyment. How can "Culinary Cinema" bridge the gap, or create awareness about these interconnections, without spoiling one’s appetite?

When you take a more conscious approach to both food and film, the pleasure principle plays a central role. You can’t argue about taste – but you can fight for taste, because good taste and joy for life are also the result of knowledge. At the above-mentioned symposium at last year’s Berlinale Talent Campus, Alice Waters spelled out her idea of “Delicious Revolution”. Eating every bite with awareness would revolutionise the world, she said. “Deliciousness” has little to do with star chefs. They too make “delicious” food, of course, but a potato grown in good soil, which is prepared carefully and is served steaming hot, is hard to top. You can prepare a potato in many different ways, but the original product is the true delicacy. Slow Food promotes the realisation that you achieve taste through the product itself. A product is the result of its origins. In this insight lies the key to helping prevent abuse through food. It’s not an exaggeration to say that a bite or a sip can change the world.

Which means, if you followed Alice Water’s maxim, “being” would be transformed through “consciousness”?

Yes, and “consciousness” would be transformed through “being”. A kitchen rascal once said: “You’re not what you eat, but what you digest.” That isn’t meant in faecal terms, but means that all food contains a story, which you digest with the food. Food is, so to speak, a film for body and soul. And a filmmaker must know and process the ingredients of his trade like a cook to create a film that goes literally gets under your skin.