Berlinale Special 2006
Tibet in the eleventh century. A land full of secrets. A land of Buddhists and mystics, of lamas, magicians and holy men, where it is not uncommon to see yogis fly through the air.
It is the year of the water dragon and, high up on a plateau overshadowed by Mount Tisi, a child is born. This boy is destined to one day become Tibet’s most famous spiritual figurehead. Before becoming the poet-monk Milarpa (1052–1135), he is known simply as Thopaga.
Born into a family of some considerable wealth, he grows up in a village named Kya Ngatsa, in southern Tibet. At the age of seven tragedy strikes his hitherto carefree childhood when his father dies. Thopaga’s uncle and aunt manage to have Thopaga’s dying father appoint them as administrators of his estate and, from this moment on, life becomes unbearable for Thopaga, his mother and his brothers and sisters. For eight long years they suffer at the hands of their exploitative, malicious relatives. Even when Thopaga at last comes of age they refuse to give him his rightful inheritance.
Bent on revenge, Thopaga’s mother believes Thopaga to be the person to help her achieve her goal. Selling her last possessions, she sends her son to a magician to gain the knowledge that will help him destroy his aunt and uncle and all their relatives. Trained by two masters in the art of black magic, Thopaga learns how to raise storms and have death at his command. He carries out a 14-day ritual which destroys his village and claims the lives of many of its inhabitants. But then, once he realises the scale of the suffering he has caused, his conscience pricks him. Persecuted by the villagers, Thopaga seeks refuge in a monastery, where he finds protection from an old monk who instructs him in the teachings of Buddha.
When he returns to the magician, he is no longer the same person. He makes his way to a new teacher named Marpa, under whose tutelage he finally becomes Milarepa, “Mila, he who wears the cotton robe of the ascetic”. 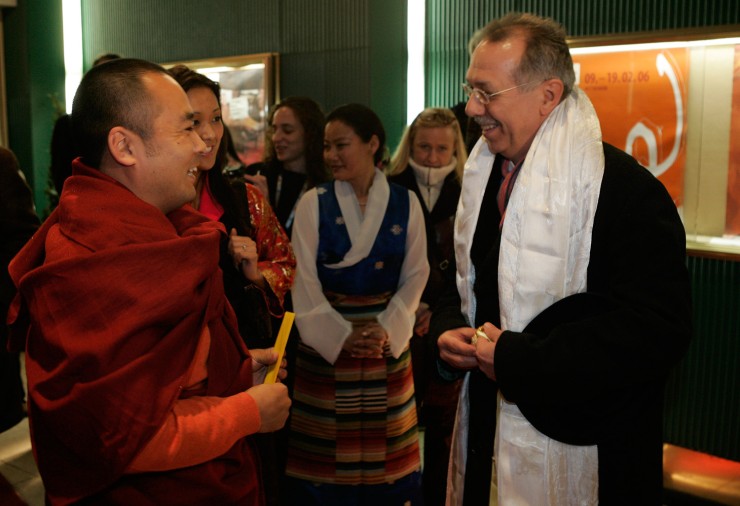