Eternal darkness seems to shroud the stadium where men with bizarre tattoos pursue a sport that is never shown or named. A body has been found here, and the police have already identified a guilty party. Now the circumstances of the crime are to be reconstructed, so that the case can be quickly shelved. However, the real killer and his teammates want to use the reconstruction to commit another crime. The twin sister of the victim, who is said to be a vampire, is to be killed. But during the re-enactment of the murder, the players forget their roles, chaos breaks out and the characters seem to be caught in an endless loop in which events repeat themselves in different ways.
The disquieting feeling that time is dissolving, that past, present and future are becoming one and that history has been halted is likely to strike a chord with how many young Iranians feel about their lives. Shahram Mokri’s intimate drama ominously interweaves place, space and time in the stadium’s labyrinthine corridors to form a dark allegory.

Born in Marand, Iran in 1977, he studied film at Sooreh University in Tehran and then began making short films. He has also worked as an editor on television films, series, short films and documentaries. His feature film debut Ashkan, The Charmed Ring And Other Stories (2009) premiered at the Busan International Film Festival. It was followed by Fish & Cat (2013) which won a Special Jury Prize at the Venice International Film Festival, screened at over 60 festivals worldwide and was a huge box-office hit in Iran. Hojoom (Invasion) is his third feature film. 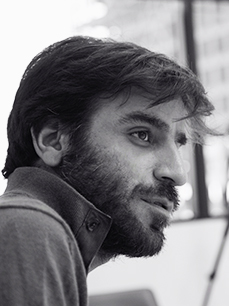