They say it’s easy to grow up but hard to be a grown-up. Berliner Charlie is certainly finding it damn hard differentiating between her own expectations and those of the people around her. Her boyfriend Marco wants to have a baby and, without being asked, her colleague Gerry offers up his own opinion: ‘What? You’ve been together for five years? Then there’ll soon be three of you!’ But Charlie’s not sure if it would be nice to have a child or whether it would mean she’d just lose sight of herself. Her job as a teacher is often pretty demanding, her beloved, fun-loving grandmother has fallen ill and things aren’t going too well with Marco who often seems to bore her. If only she could reclaim just a little of the old excitement of the time when she’d dance the night away. Others seem to find being a grown-up a lot easier. Gerry decides to buy himself a motor caravan and head for the Balkans, and her best friend sets off on a backpacking tour of Asia. Why is everything changing for those around her and why is she the only one for whom life appears to be at a standstill? What Charlie needs is a breath of fresh air.

Born in 1982, father died in 1984, grew up with grandma in small village near Osnabrück, Germany. 1985: first cinema trip (The Jungle Book). Entered secondary school in 1995; thrown out in 1996. Began writing in 1997. 1998: had to repeat a school year and met Oliver Jerke, now producer of his films. Made first short in 1999, rejected by German Film and Television Academy in 2006, probably deservedly so, according to himself. From 2008-12: hung out with Jerry Schatzberg in New York. 2013: found his voice as a storyteller. 2016: sold his first two films to Netflix. 2017: learnt that German film funders promoting young talents punish those making small films with no money. 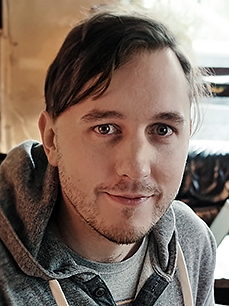