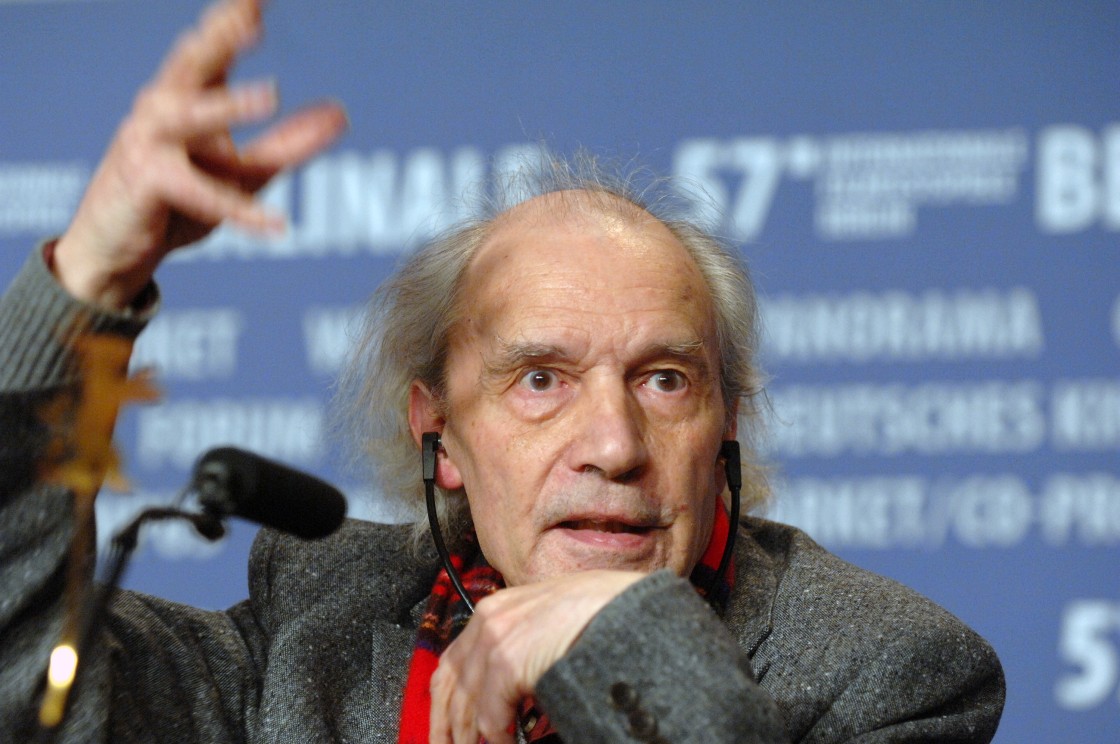 Jacques Rivette at the Berlinale 2007

I only met Jacques Rivette once, on a Champs Elysées side street. We were both exiting a cinema after a screening of Mathieu Kassovitz’ La haine (1995). I didn’t dare ask him what he thought of that film, which was so different from his output. Instead, we talked about his most daring and freewheeling work, Out 1: Noli me tangere (1971). As he reminisced about it, his face opened up to that wide, contagious smile that many view as his defining character trait. I had seen that film, which was hard to find at the time, on VHS, long after its debut screening in Le Havre, which occurred a few months before my birth, and also after its memorable Berlin showing in 1991. As I watched, or rather lived through its more than 700 minutes, I had enjoyed losing myself in the company of actors and characters with whom I had started to become familiar. Rivette’s films were, and are, part of my life as a viewer: something to anticipate, not judge. It’s like when you anticipate the return of a friend, knowing that after some initial awkwardness they will bring news from their most recent trips.

I do not remember if I had already seen Jeanne la pucelle (1994) at that time, but I probably hadn’t, because otherwise I don’t think I would have missed the similarity between his smile and Sandrine Bonnaire’s. Through her performance as the “warrior saint”, she got closer to the director than anyone before her: the mixture of intransigence and naiveté, of stubbornness and improvisation, of mysticism and practicality, all traits that define the character, is also how one could describe the most reserved and mysterious of the French New Wave directors. Unlike Truffaut or even Godard, Rivette never sought to portray himself: there is very little of his life in his films, which were conceived as collective stories, written with multiple collaborators and shot with actors and crew as though they were part of a “gang”, with rules stemming from mutual acquaintance and respect.

Sharp and confident as a critic, Rivette seemingly went in the opposite direction when he moved behind the camera. His films are not “Directed by”, but simply state “mise en scène par”. It is not easy to translate that expression, which originated in the theatre. Mise-en-scène is, obviously, transposing a (verbal) story into a space-time within the plan (shot); but it’s also the ability, within the shot, to give the actors sufficient freedom to express themselves so that they don’t become models, as Bresson would put it, or faces that are uprooted from the surrounding space, like in American films. Rivette rarely used close-ups, and when he did he often accompanied them with camera movement. Jeanne la pucelle has some beautiful ones, both frontal and as silhouettes, like Medieval iconography. By opposition, we think of Carl Theodor Dreyer’s La passion de Jeanne d’Arc (1928); those who are familiar with Jacques Rivette’s filmmaking and his way of handling space, with lines drawn between gazes as though they were tracers left by invisible arrows, know that such a choice is not due to a wish to set himself apart. The film is a character study, and the character in question is impervious to all attempts at appropriation from those around her. In that sense, Joan is an older sister to a lot of other characters, much like Anne in L’amour fou (1969) or Marianne in La belle noiseuse (1991) – all similarly named, curiously enough. Rivette’s women are strong characters, who are independent from men and also from the camera. They are sirens that enchant us through silence rather than words.

The narrative structure Rivette concocted alongside Pascal Bonitzer and Christine Laurent highlights this aspect. The story of how Joan became the leader of an army and the liberator of France (not just from English rule but also from an internal stillness dictated by fearful captains and churchmen), and therefore also an obstacle that had to be removed, is sprinkled with testimonies, filmed as though the witnesses were facing an imaginary tribunal. As Rivette couldn’t give a voice to the words that bestowed Joan’s mission upon her, he let us hear the voices of those who were around her. This storytelling device turns the saint’s life into a chronicle. Rivette’s interpretation, that of a character who is one with the land, acts as a counterpoint to the ascetic face in previous renditions. In the very first shot of the film, introduced by a crowing rooster, Joan, not yet clad in armour, is dressed in opaque green like the wet field grass she’s about to step on, and wears an earth-toned frock in the second part. Sandrine Bonnaire, whose face is both soft and hard, with a square jaw and an open smile, adds something special to the character. If you’ve seen Agnès Vardas Sans toit ni loi (1985), you might notice the similarities: Joan is not a vagrant, in that her destination is very clear, but there is a common thread of a woman who uses her life and her choices to challenge and reform the world she lives in.

There is something familiar about her. Be it on Paris rooftops or in the hallways of a monastery, inside and outside a theatre or performing as acrobats on the street, Rivette’s characters are like horsemen, always on the move, stubbornly opposing the wind. As though they were a multitude of Don Quixotes, they can see things that exist only in their minds. Whether they’re riding horses or scooters, ploughing through pathways with a book as a map or playing at a surreal roundabout, it is to them that Rivette handed over his vision of the world and his desire to change it, at least through cinema.