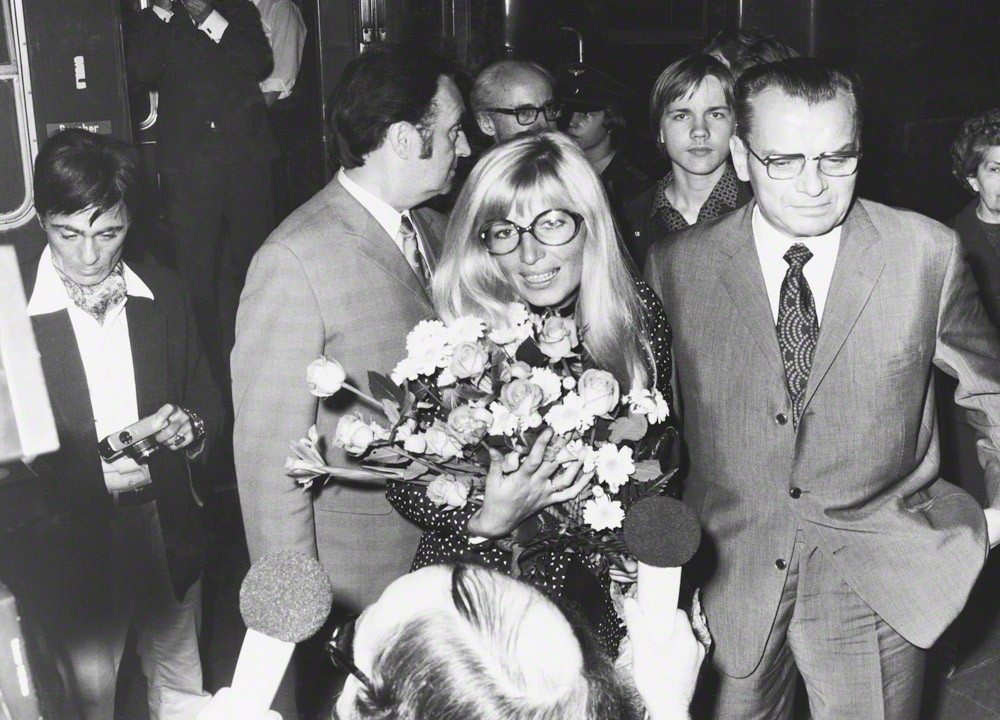 Monica Vitti with Alfred Bauer, who was then director of the Berlinale, in 1971

I look at the picture, over and over again. I look for something that will lead me back to the star, to the extraordinary actress who holds a special place in the mindscape of many who, like me, discovered her at a later stage. Behind those huge glasses and the bouquet held by an open hand, I look for something I cannot find.

Or perhaps her image is defined by that pulling back. In spite of the glowing face and the wide, fleshy mouth, Monica Vitti carried with her a shade of darkness that somewhat shielded her from the exposure her contemporaries and colleagues (willingly) subjected themselves to. She didn’t have the explosive presence of Gina Lollobrigida or Sofia Loren, nor the mysterious charm of Silvana Mangano or Claudia Cardinale, not even the subtle grace of Elsa Martinelli. Film after film, Monica Vitti created her own personal canon of beauty and seduction. Step by step, by being childish and sophisticated, coarse and intellectual, she subverted expectations and caught viewers off guard. Whether she was a muse for the most refined of directors or a body/voice shaping itself in the most popular of Italian comedies, one must go to the extremes to seek the identity of this actress who is so unique in the Italian and international cinematic landscape. From L’Avventura (1960) to The Pizza Triangle (1970), Monica Vitti embodied the different facets of a country in the midst of a metamorphosis, retaining a courtyard feel even when wearing an evening dress and high heels. Monica Vitti contains much of the ambiguity that made Italy a modern and archaic country at the same time. In a male-dominated cultural and economic system, she proved to be an image of independence and resistance to conventions. Perhaps it is for that reason she was among the few capable of handling drama and comedy, the cinema that trades in silence and the one that bet everything on jokes, more so than words. In both cases that shade of darkness was her valuable ally, allowing her to dissolve the earthy impulses of comedy while at the same time not evaporating into pure metaphysics. Or, as she would put it, she found in Michelangelo Antonioni’s characters a backdrop of passion hidden from fear, whereas in Dino Risi or Mario Monicelli’s comedies she found a sort of “rebellion facing the anxiety, the sadness and the melancholy of life”.

When re-reading her memoir, I slide into a passage where she recounts the Cannes experience of L’Avventura in 1960, a film that wasn’t received very warmly. She sums it up very succinctly: “Cannes I remember not as a dream, but as a nightmare. All those people, the photographers…” About a year later, La notte (1961) screened in Competition at the Berlinale, where it won the Golden Bear. Monica Vitti does not play the lead, but she does not require much time and space to create a character who transcends the barriers of the storytelling and shots. Introducing her, at a party where everyone apes America and its carelessness, is a book. Valentina is reading, sitting on a staircase. While the storytelling emphasises the idea of perpetual movement, with characters simulating commitments and meetings (moved by a wind that is reminiscent of Dante’s Inferno), the young daughter of the industrialist host appears as a fixed point. That is her way of expressing her inner unrest, an echo of sorts of the film’s own restlessness. Valentina is simultaneously an emanation of the modern world and a critique of that same world. The character reveals this ambivalence in a magnificent sequence that is marked by the shadows across her face. One could write an entire piece on the role shadows play in Antonioni’s work, be they generated by the sun or – as is the case here – nighttime shadows. The shade on the actress’ face is a reminder and a replica of the intense black that Monica Vitti wears to perfection, a colour that, even more prominently than with Jeanne Moreau, struggles with the white complexion. In a film recounting the protagonist’s slow descent into indifference, the women carry on with the contrast. They attempt something that might shake off the numbness. At once a girl and a woman, a playmate and a seductress, Valentina is, at the end, the only one who stays honest with herself. Her mood swings, her relationships with the space, with the furniture and with men accurately describe the nature of a person who can’t find her place among things – perhaps because those things are never what they seem. In La notte, Antonioni places his description of existential crisis within the framework of a country/city that is changing, and through that change allows its roots to show, as though they were superimposed on the advancing urban spaces. He entrusts his then life partner with the task of accounting for that duality, turning her face into a screen where he can project his own insecurities. It is a nice change of pace compared to their first encounter, when the director said to her: “You have a nice neck, you could make films.” Young Monica is said to have replied: “And you would only see my partner’s face?”