Between Image and Reality: Isabelle Huppert

In Fritz Lang’s The Woman in the Window (USA 1944), a professor (Edward G. Robinson) exits his usual club and stops in front of a shop window, where a female portrait grabs his attention. Unexpectedly, the image doubles, and next to the painted woman another one appears, reflected in the storefront window’s mirror. Soon enough, the woman invites the professor to her place, upending his comfortable routine. As pointed out by Luc Moullet, Robinson – a slipper-clad professor – perfectly embodies the middle-class man inside all of us: cautious and overall dull, but also tempted by transgression. Besides the glass, he faces an image, which will acquire a physical form that, much like the painting, shall remain a pure object of desire for the duration of the film. Close to the eye, and yet so far away. 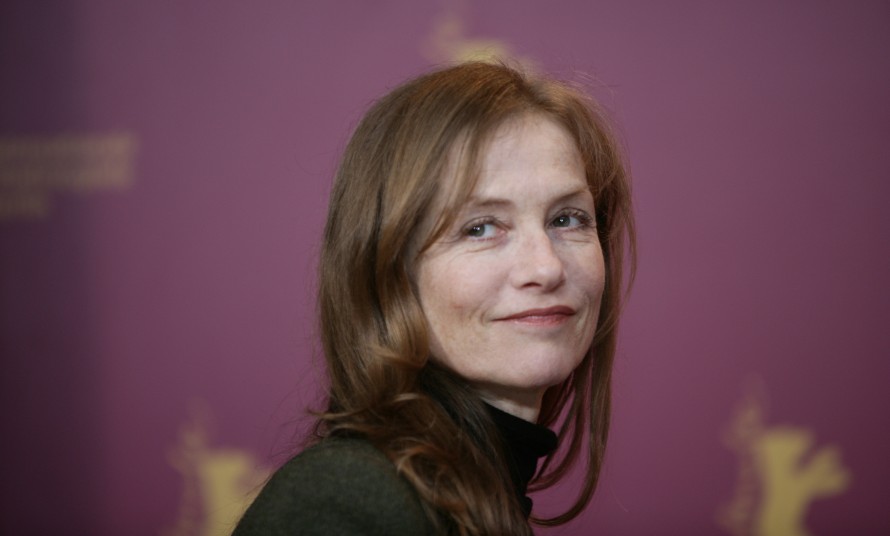 If I’ve allowed myself this detour, it’s because there’s something about that scene, and Joan Bennett, that reminds me of Isabelle Huppert. She also frequently appears like a creature out of a museum display – although more of a Flemish painting subject than a Victorian figure. Like Joan Bennett, Isabelle Huppert can take the viewers out of their comfort zone and into unconventional, dangerous territory. Likewise, especially through her marvellous collaboration with Claude Chabrol, she becomes a mirror through which bourgeois hypocrisy gets laid bare. She also flirts constantly with representation and reality, an object of the gaze as well as the gaze itself that replies and questions you. Where most actresses work to create an image that seduces in a direct manner, embodying a recognisable female template, the impression with Isabelle Huppert is always that of the image doubling in reality, one that Lang admirably summed up in a single shot. From the very beginning of her film career, Isabelle Huppert has sought detachment, leaving the viewer to deal with their own desires, demons, and contradictions, as evoked by her performances. 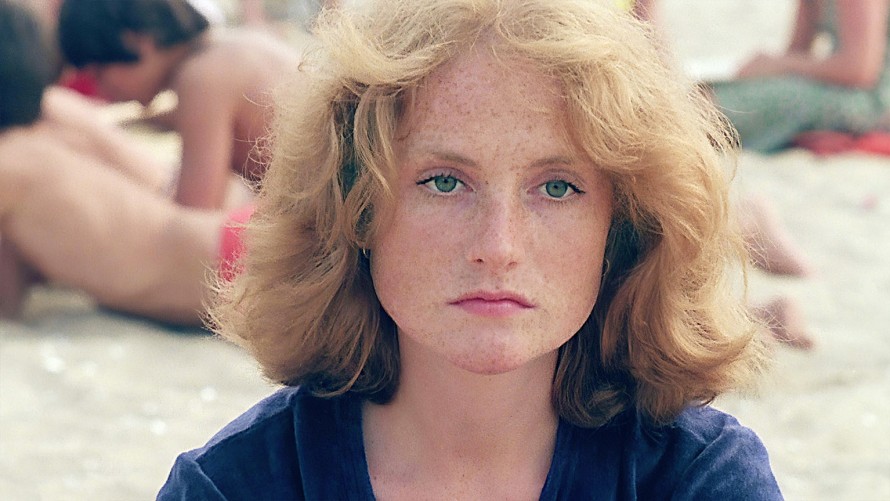 There’s a scene in Claude Goretta’s La dentellière (The Lacemaker, Switzerland 1977) that is fairly eloquent on the subject. In a medium shot, young Pomme is enjoying a chocolate ice cream. The spoon slowly moves from the cup to her mouth. There’s a small break, and then another spoonful. Off-camera, we hear a young man’s voice. Pomme listens and replies with the same calm with which she is enjoying the ice cream. The girl, shy though she may be, is at ease. She does not fear the presence of the man, but she doesn’t do anything to allow him to get closer either. The perspective within the scene is even more significant. Like in a painting, we are facing an image: although the story brings the two characters closer, the camera remains at a distance we could call social. Pomme is filmed not from the young man’s point of view, but with a frontal approach that recalls the theatrical stage. Or a painting. Pomme waits, briefly looks off-camera, without losing her posture; her gestures are slow and calculated, as though someone were crafting her portrait. The rhythm of gestures, the sparse use of words and the choice of angles take the scene beyond the field of the real.

Having trained in the theatre, to which she remains connected to this day, Isabelle Huppert understands cinema is not reality. The underlying realism of cinematic storytelling is an extraordinary tool to keep viewers involved, but also a trap when used as mimesis. She does not seek to identify with each character. Her demeanour, choice of roles and style of performance enable her to keep a distance from the camera and the viewers connecting to it. The ability or technique she excels at is creating a detachment from reality without drawing attention to it. The facial expression that marks a scene, a state of mind or a character may be strong and emblematic, but is often the culmination of a slow, progressive, imperceptible departure from reality. 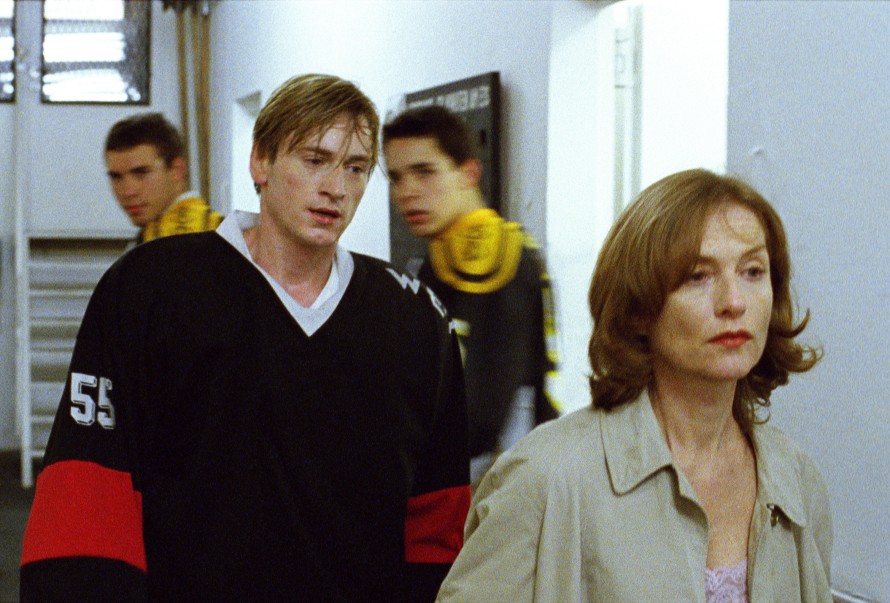 With Benoît Magimel in La pianiste

Such is, for example, the famous grimace in La pianiste (The Piano Teacher, France 2001, dir: Michael Haneke). The scene revolves entirely around her close-up (an atom-microcosm, per Balász’ definition) and his absence. And when Walter Klemmer passes by, without the camera being able to capture him, there’s the unexpected gesture. The consistently controlled face morphs into a grimace, which is sour, violent, and painful at the same time. The self-inflicted wound is the consequence of that grimace. That wound is like a sardonic smile. A small rivulet of blood that even a tiny hand can dissimulate. The scene ends with an unpredictable change in composition, with a wide exterior shot where Erika walks in a slightly syncopated manner in front of the theatre’s façade, whose lights and shadows resemble the keys on a piano. 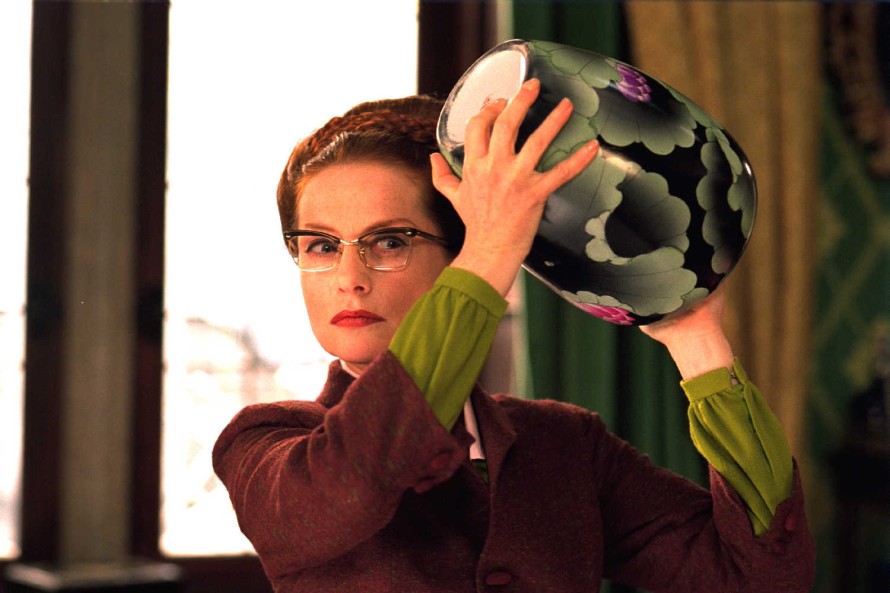 Black and white. With Isabelle Huppert, the mouth and the eyes often work in opposite directions. Their bond is dialectic: one calls to attention, the other keeps a distance. One is the gateway to a barely suppressed emotion, the other a vehicle for merciless irony. Sometimes, the roles are switched: the eyes become cold and emotionless, while the mouth produces a wide, inviting smile. In François Ozon’s 8 femmes (8 Women, France 2002), a film that emphasises clean faces and pale skin, Huppert’s character is the most playful with colours – the outfit’s green (a slightly outdated spring) and brick red flirt with the brighter red of her hair. And the clothes’ vivacious colours disappear when the close-up becomes extreme. During the song, the idea of separating mouth and eyes with a hand gesture brings forth the two extremes of Isabelle Huppert’s face, creating a theatrical construct that by itself, in a playful but at the same time highly dramatic manner, makes the character’s depths obvious, where previously they were locked up in choreography.