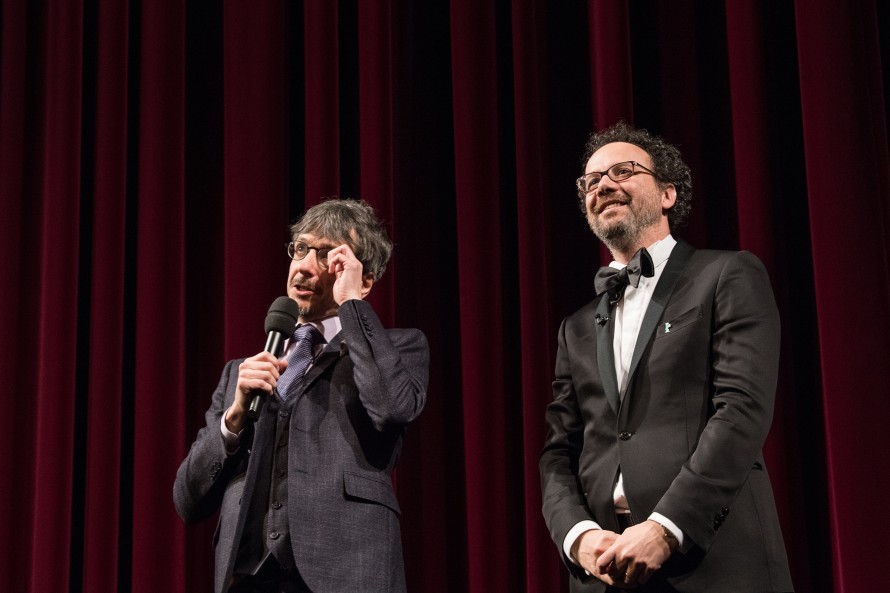 2020: Carlo Chatrian (on the right) with Philippe Falardeau, the director of the then opening film My Salinger Year, on the stage of the Berlinale Palast

When I wrote these lines, I did not yet know if the 72nd edition of the festival could take place. A few years ago, I would have found such a situation intolerable; today, on the other hand, we have learned to live in a state of undefined uncertainty and to look beyond the horizon of events we cannot control.

The 2021 Berlinale taught us the value of flexibility and the extraordinary capacity to adapt that films, artists, the cinema and those like us who support them have. The year 2022 comes with a new set of challenges. We believe that flexibility must now be replaced by firmness in the context of a project that can no longer forsake its primary role.

This is based on the certainty that a festival like the Berlinale can only exist under specific conditions. This is not about imposing one modus operandi (in-person) in opposition to another (online), but rather about acting as the guardian of a space that is at risk of disappearing. Seeing a film in a theatre, being able to hear breathing, laughter or whispers next to you (even with correct social distancing), contributes in a vital way not only to the viewing pleasure, but also to strengthening the social function that cinema has, and must continue to have. If films claim and aspire to depict human beings and the world in which they live, they must address a community, an audience, and not a collection of users each with their own login. Films at a festival are shared in a space that belongs to nobody. You access it by agreeing to rules that cannot be waived. To take part in a festival means sharing an experience with other people who often have different tastes, backgrounds and cultural leanings. Seeing a film with other people at a social venue is an exercise in openness and humility – one we believe to be essential nowadays.

Films have proven capable of travelling beyond borders, but what this year’s selection process tells us is that cinema’s versatility, including the ability to make films during a lockdown, is of no use if freedom of thought is absent. Several films submitted for this year’s selection were shot during the pandemic, and they often represent it directly. We have viewed many films with single-location stories, films which feature very few characters and films which open virtual windows into other, equally isolated contexts. The film industry brought us face to face with numerous films that intend to reproduce that which had transpired during the last year, as though there were no other option. We have considered this and have tried to take it into account when making our selection, while preserving the artistic dimension that requires a film to be something more than a mirror of the state of things.

The films of the 72nd Berlinale provide a good description of the world in its current changed state, but also of how it was, and how it should or could be. Faced with the desire to reproduce what we have lived through (and we inhabitants of planet Earth have never been so far apart and yet so similar in our lifestyles), many films have responded with the power of the imagination, humour, the emotions, and physical confrontations that are sometimes passionate and sometimes violent. Masters and newcomers find themselves on the same wavelength, ready to challenge the dominant sameness with stories that are surprising for their stylistic freedom and the desire to experiment. We have fallen for films that are bold enough to view barriers as launchpads and turn the invisible line that separates us from our neighbour into a point of attraction. Never before have we seen and welcomed so many love stories as this year: crazy, improbable, unexpected and intoxicating love – which is, after all, what all encounters are about, deep down. Even when the gaze is focused on a single character, the films of the 72nd Berlinale are all conceived for a collective of viewers who have the power to be moved, to applaud and even boo. We look towards this kind of festival experience with the certainty that, if we had to give it up, it would be better to do so in a gesture that is a cry of resistance. If only to reconnect with it, stronger and sturdier, next year.