MagentaTV has been a principal partner of the Berlinale since 2020. Telekom's innovative entertainment offer combines classic television with over 75 channels in HD, series & films in the popular Megathek as well as streaming services on one platform. It signifies independence from location, space and time. MagentaTV captures the highlights and most beautiful moments of the festival and transports the Berlinale feeling into German living rooms.

The official cosmetics expert of the Berlinale has been creating the perfect red carpet look for the stars with their professional make-up artist team since 1999. Movie icons such as Kate Winslet, Helen Mirren, Andie MacDowell, Jane Fonda, Eva Longoria and Elle Fanning demonstrate that the world of film is closely linked to that of beauty. Unfortunately, the popular make-up studio at Potsdamer Platz cannot be set up this year due to the pandemic.

As the main media partner of the Berlinale, ZDF/3sat has staged all stage events in the Berlinale Palast since 2005 – from the Opening to the Shooting Stars Awards and the presentation of the Honorary Golden Bear to the Award Ceremony with the International Jury. As a leader in the press pool, ZDF ensures the transmission of TV images to the numerous national and international channels. In addition, the channel reports extensively on television and in the ZDF online offer about the Berlinale.

ZDF is providing the Berlinale with the lanyards again this year. These are made from corn starch and, in order to protect the environment and conserve resources, were produced for the next three years and in significantly reduced quantities.

The traditional ZDF Lounge in the Hyatt Hotel is planned again, but with limited opening hours due to the pandemic. 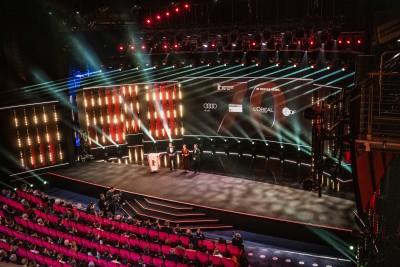