"Remember how it was last year? Black crepe banners waving above the Berlinale flag, the shots of the June Uprising still ringing in the loudspeakers, and many guests had cancelled their visits. This time, there were more visitors than anyone had expected, and along Kurfürstendamm life was flowing as it had not done since the end of the war. Singles of both sexes and all ages crowded in around the big hotels, breaking through police lines...; and when they wished to see their favorite star, Gina Lollobrigida, at her window, they shouted in chorus, bringing back eery memories..." – Zeitgeist and history in an article by Hugo Hartung for the "Deutsche Zeitung". 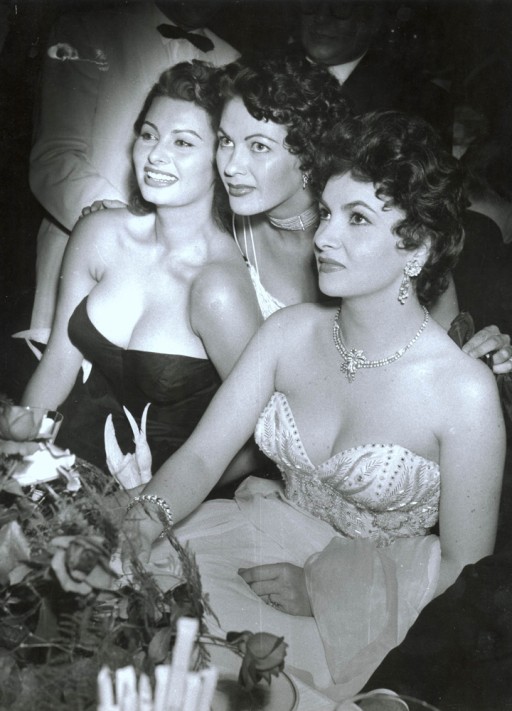 A year of the stars

Richard Widmark, Jean Marais, Curd Jürgens, Vittorio de Sica, Yvonne de Carlo, the young Sophia Loren, and above all Gina Lollobrigida – the audience couldn’t get enough of them. The image of the festival was dominated by crowded in front of the Berlinale hotels and venues. The audience’s yearning for the stars and its cavalier way of expressing its enthusiasm becomes a trademark of the Berlinale.

Once again the Bears are awarded by the audience. This time “actor’s films” are a big hit. Again several films go unnoticed, that are discovered later by international critics, including Magnificent Obsession by Douglas Sirk and Akira Kurosawa’s Ikiru. They don’t seem to fit into the festival hype – but even Rummelplatz der Liebe | Circus of Love, a German-American co-production made by Kurt Neumann, was a failure with the audience and was booed mercilessly by 25,000 spectators at its premiere at the Waldbühne outdoor arena.

The failure of German films again that year was accompanied by debates about the lack of participation of the German film industry in the festival preparations. In hindsight, it appears to have been a political aim of the Senate to keep control over the festival. SPIO (German producer’s association) published a letter of protest, after none of its representatives are asked to join the working committee. While the complaint was conceded, at the same time decision-making power was shifted to a second body, the advisory board, in which the Senate had the ultimate say. 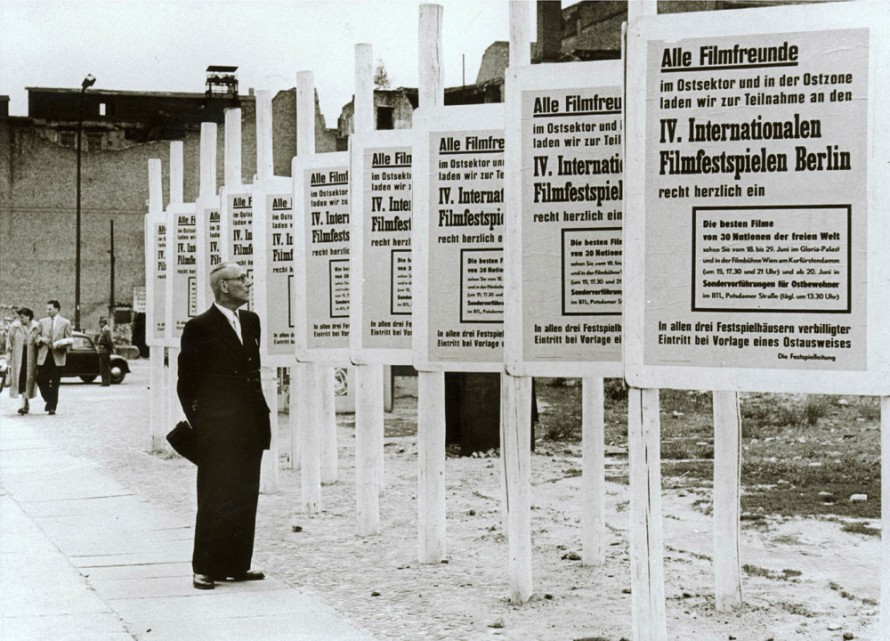 Berlinale posters along the border to East Berlin.

The ambition of the political players failed to materialize in the form of stable finances for the festival. On the contrary, during the run-up to the Berlinale, there were once again debates about budget cuts and all kinds of protests and memoranda from Alfred Bauer were necessary to secure a somewhat adequate budget – which iwas finally covered in large by the Federal Government, which approved a short-term subsidy of 100,000 deutschmarks.

At the first glance it is difficult to understand the circumstances the Berlinale found itself in. Undoubtedly, the vague institutional and financial security of the Berlinale was largely due the uncertain political status of Berlin. The overt participation of the German Federal Government in the organisation and direction of the festival could be seen as damaging the “neutrality” of Berlin and led to high-level political problems. The governments of the GDR and Soviet Union kept a close eye on whether and in which form the Berlinale was financed by the Bonn government and whether the festival was “politically instrumentalised”.

In fact both sides were responsible for the decades-long absence of Eastern European films from the Berlinale. Officially, the Berlin Senate had made a fundamental decision not to invite films from the Eastern Bloc to the festival; but even when different rapprochement efforts were made by the western side, these were briskly dismissed again and again by the Eastern countries, who pointed to the diplomatic status of Berlin and the infringement of neutrality through the partial financial backing of the film festival by the Federal Government.